WerkNet
Your Family
Your Career
Your Health
Your Money
You and the Law
Occupational Guilds
Solidarity Youth
S-Leer
Home › Corruption › 1. Local government 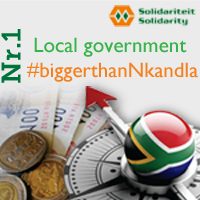 Corruption and financial irregularities are rife within local government and has a dire impact on the lives of communities. As government’s interface with the public, officials that irregularly spend, solicit or waste much-needed and precious resources are diverting them away from essential service-delivery functions and local economies.

In 2013, Corruption Watch declared local government to be the most corrupt institution in the country. Between its launch at the beginning of 2012 and January 2013, a quarter of all tip-offs to this watchdog involved corruption at municipal level. Samwu spokesperson Tahir Sema says local government “is riddled not only with financial woes, but also with corruption, maladministration and a lack of accountability”. Corruption Watch spokesperson Bongi Mlangeni summarises it perfectly: “We receive too many reports about maladministration, mismanagement of public funds and abuse of resources by officials at local government levels. It seems there is a need to rethink how systems of accountability can be applied at these levels.”

The Auditor-General’s latest round of audits (2013-14) revealed alarming levels of supply chain management (SCM) irregularities, a primary driver of irregular spending and a common form of corruption in South Africa. For instance, more than two-thirds of the municipalities and over 40% of the municipal entities had material SCM findings. Moreover, 304 awards were made to suppliers at 72 auditees (22%), totalling R60 million in which employees and councillors had an interest. A total of 189 employees, 21 councillors and 198 suppliers benefitted. This is a regression from the previous year’s 55 auditees. The AG adds the following: “At 113 auditees (35%), the municipal manager and council did not investigate the irregular expenditure of the previous year to determine of any person was liable for the expenditure. Consequently, it was not determined whether the irregularities constituted fraud or whether any money had been wasted.”

The Solidarity Research Institute’s own research on municipal affairs have since 2013 reported large-scale irregularities and corruption in many municipalities. Municipal managers, chief financial officers and mayors in numerous municipalities around the country have, with impunity, siphoned off millions meant for serving the need of residents. Moreover, these instances are merely the cases reported in the media and do not fully encapsulate the many transgressions that go unnoticed and unpunished, especially in rural municipalities in provinces like the Free State, Limpopo and North West. Reports received by Corruption Watch confirm that corruption is indeed high in rural areas, with 42% of the complaints on local government coming from small towns.