WerkNet
Your Family
Your Career
Your Health
Your Money
You and the Law
Occupational Guilds
Solidarity Youth
S-Leer
Home › Corruption › 10. Nkandla 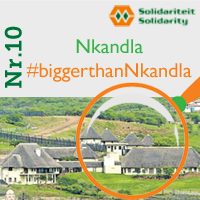 Owing to intense and often sensational media coverage and the opposition parties’ expediency on the issue, President Jacob Zuma’s homestead (along with its many bells and whistles) has become the most prominent instance of corruption and the misuse of public funds in recent times. The Public Protector, in her report on the issue entitled “Secure in comfort”, found that Zuma and his family unduly benefited from the upgrades and recommended that he pay back a reasonable sum of the R246 million not related to security. The ANC has used its majority in the ad hoc committee to stonewall critics and adopt Police Minister Nkosinathi Nhleko’s report, which contradicts Thuli Madonsela’s report and absolves Zuma of paying back any money.

Back to Corruption Main Page