WerkNet
Your Family
Your Career
Your Health
Your Money
You and the Law
Occupational Guilds
Solidarity Youth
S-Leer
Home › Corruption › 2. Tenderpreneurship 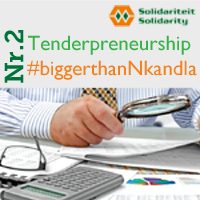 Masked as a way to empower previously disadvantaged businesspeople, tenderpreneurship has become one of the most deleterious banes of the new South Africa. It is completely systemic, it has degenerated into unalloyed cronyism and is costing the economy billions each year. In its most basic form, tenderpreneurship involves government employees colluding with politically-connected people, as well as family members and friends of politicians, in order to flout supply chain management (SCM) procedures with the aim of winning tenders from the state. The price of the tender is usually grossly inflated and certainly not the most competitive. Both parties usually gain from this highly irregular and corrupt practice as those awarding the tenders are paid kickbacks from those being awarded the highly lucrative contracts. The biggest losers are the taxpayers, who invariably pay excessively for, and consume, inferior products and services rendered by venal tenderpreneurs. Sometimes these products and services are not even rendered at all.

The Auditor-General (AG) highlights some of the egregious abuses taking place at provincial and municipal level under the banner of tenderpreneurship. For instance, irregular expenditure of R2,429 billion was incurred by 17 auditees in the Free State during 2013-14. It was mainly caused by non-compliance with SCM requirements. In KwaZulu-Natal, irregular expenditure worth R4,32 billion was incurred owing to goods and services received despite SCM processes not being followed. In Limpopo, irregular expenditure almost doubled from R2 million to R3,5 million between 2012-13 and 2013-14, and the main contributor was non-compliance with SCM procedures. Every provincial administration in the country contravened the prescribed SCM procedures during 2013-14.

Forty-five percent of municipal auditees did not invite three written quotations for procurement below R200 000 during 2013-14 and the deviation was not approved, or the approved deviation was not reasonable or justified. Nearly 60% of the auditees had material findings concerning uncompetitive and unfair procurement processes and these findings were also the main cause of the irregular expenditure of R11 351 million.