WerkNet
Your Family
Your Career
Your Health
Your Money
You and the Law
Occupational Guilds
Solidarity Youth
S-Leer
Home › Corruption › 3. Tshwane Prepaid Meters 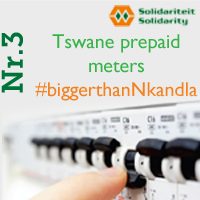 What seemed like a wise measure aimed at combatting the non-payment of electricity in the City of Tshwane, was exposed as an exceedingly expensive and corrupt imbroglio. The DA equated it to eight Nkandlas and it is yet another example of the nefarious and noxious nature of tenderpreneurship.

Following a flawed tender process that saw the dubious PEU Capital become the successful bidder and an initial roll-out process, Tshwane abruptly cancelled the controversial contract in May 2015. Amongst other charges, one of PEU’s subsidiaries, Masana Technologies, was responsible for Johannesburg’s recent billing crisis. Tshwane had paid PEU a gargantuan R830 million between October 2013 and May 2015 to install 800 000 meters and manage the project for eight years. At the time of cancellation, only 12 930 meters had been installed while PEU was required to install more than 435 000 during the first two years – a target it was highly unlikely to achieve. Cilliers Brink, a DA councillor in the Tshwane council, said the PEU deal would shift the responsibility for prepaid metering from “unreliable comrades in government to unreliable comrades in business, while we all end up paying more”.

Asked about the reasons for the cancellation, the Metro merely stated that it got too expensive and it blamed AfriBusiness, the business watchdog of the Solidarity Movement, for undermining the roll-out of the meters. AfriBusiness launched a court bid to halt the installation of the meters and declare the contract invalid on the grounds that the tender process was flawed. According to Willie Spies, representing AfriBusiness, the termination was just as corrupt as the agreement itself. He said according to reliable sources the Metro was planning to keep paying PEU R3 million per day (R800 million) after the cancellation of the agreement. “This means that the cancellation of the agreement will be even more harmful than the maintenance thereof,” Spies said in a statement.

Soon after the cancellation of the contract, the bidding process was reopened and Tshwane mayor Kgosientso Ramokgopa told a press briefing that PEU would again be able to tender.