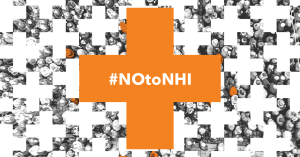 Solidarity today submitted its comments on the National Health Insurance (NHI) representing a mandate of 30 000. These comments, which already take on the form of court documents, have been formulated with the aid of two independent expert reports written by Prof Jannie Rossouw and Prof Alex van den Heever respectively. Moreover, the Solidarity Occupational Guild for Health Care Practitioners instructed the Solidarity Research Institute (SRI) to conduct a survey among practitioners.

Morné Malan, a strategic specialist at Solidarity, says: “The NHI, should it come into effect, would bring an unprecedented disaster for South Africans. That is why in opposing it we are following an all-encompassing plan from day one. There is not a single harmful or unconstitutional aspect in the bill that has not been addressed in our comments. We are also ready to participate in all further processes, to lobby against the bill and to resort to court action right to the Constitutional Court should this bill ever be enacted.”

The Solidarity Occupational Guild for Health Care Practitioners expressed concern in particular about the impact this bill would have on those working in the health care industry. Hennie Bierman, head of Solidarity’s Guilds, explains: “The NHI deprives health care practitioners of almost every freedom related to how and where they practice their profession; it turns doctors, nurses, pharmacists and all other health professionals into mere commodities, denying them their humanity, as it were. They are not being treated as individuals with rights but rather as resources and state assets that can be allocated as government deems fit. It is no wonder that our national survey among health practitioners shows that they are almost unanimous in agreeing that government will not be able to manage it and that health practitioners are not interested in working within such a system.”

Malan concluded: “These comments are but one blow aimed at the NHI. We don’t know just how far government’s irrationality and insanity will go. We don’t know how many blows will be needed to stop the NHI, but we are ready to come up with as many blows as will be needed, and, ultimately, with even more as long as we can stop this disastrous policy.”