WerkNet
Your Family
Your Career
Your Health
Your Money
You and the Law
Occupational Guilds
Solidarity Youth
S-Leer
Home › Corruption › 4. The South African Police Service 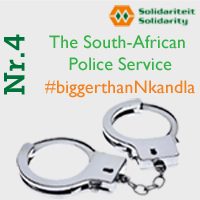 Corruption in the police is a very serious matter as issues of justice and accountability are at stake. Cash-flush criminals could bribe police officers to thwart cases against them while poor people are denied justice as they simply do not have the means to pay police officers to do the work they are supposed to do as a free public service. If the police become sufficiently corrupt, the country’s social fabric could fray and we are on our way to becoming a failed state.

According to Transparency International’s Global Corruption Barometer (GCB) for 2013, more than a third (36%) of people said they had paid a bribe to police officers in the previous year and 83% said the police were corrupt. In 2012, a survey by the Human Sciences Research Council (HSRC) – assisted by the South African Social Attitudes Survey (SASAS) – showed two-thirds of South Africans believe police officers are the most corrupt government officials. Home Affairs officials trailed badly in second place with only 38% – nearly half of the police’s 66%. Paradoxically, 66% of the respondents indicated that the police are the most effective weapon against corruption.

Corruption involves low- and high-ranking officials, and this demonstrates its systemic nature in this prized institution. For instance, ten SAPS members were arrested at the Parow police station on bribery and corruption charges in late 2014. In early 2015, the Hawks arrested six police officials in three different provinces on suspicion of corruption. The embattled national police commissioner, Riah Phiyega, also stands accused of tipping off the Western Cape police commissioner, Arno Lamoer, about a Hawks corruption probe against him. Lamoer is suspected of having a corrupt relationship with the Cape Town drug dealer Salim Dawjee and accepting bribes of more than R1,6 million in return for his influence in cases. However, the most controversial corruption case was that of the R500 million lease of the police’s new headquarters in Pretoria. After a 10-minute meeting with the police in 2010, the deal was irregularly awarded to property mogul Roux Shabangu. The fallout later claimed the head of the then police commissioner Bheki Cele, who is the current Deputy Minister of Agriculture, Forestry and Fisheries.