WerkNet
Your Family
Your Career
Your Health
Your Money
You and the Law
Occupational Guilds
Solidarity Youth
S-Leer
Home › Corruption › 5. The metro police 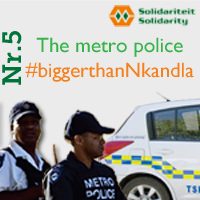 A simple Google search combining the terms “metro police” and “corruption” generates 123 000 results within 0,3 seconds. Transposing “corruption” and “bribes” delivers more than 35 000 results instantaneously. This institution frequently hogs headlines for all the wrong reasons. Metro police officers are regularly accused of soliciting and accepting bribes from motorists and abusing their powers to intimidate those they are supposed to protect. Corruption in an institution like this is very disquieting because, as is the case with the police, criminals and traffic offenders are cognisant that a mere bribe could easily get them off the hook. Bribes also routinely substitute for lost legitimate income via speeding tickets and other traffic fines that are not issued. Members of the public are obviously not only victims in this as corruption is a reciprocal process and bribes are offered as well as solicited. Justice, the rule of law and law-abiding citizens are the ultimate victims.

Documenting the number of incidences of corruption involving metro police officials and revealing the full extent of corruption in the metro police in a limited space like this is not possible. It is, however, instructive to highlight some of the many cases – big and small – reported by the media. In January 2015 alone, three Tshwane metro cops were arrested for bribery. Two of them tried to solicit a bribe from Crime Line head Yusuf Abramjee and met their comeuppance. Even more startling is that the Tshwane Metro Police Department sacked the 67 members of its anti-corruption unit in late 2011 and officially disbanded the unit in 2012. The reason for this was that many of these officials were leaking information on corruption investigations to those being probed in exchange for pay-offs.

A worrying 184 out of 2 600 officers at the Johannesburg Metro Police Department (JMPD) were probed for corruption between 2009 and 2011. As recently as June 2015, four members of the JMPD were arrested for soliciting a bribe from a suspect in exchange for making the docket disappear.

These arrests and investigations could be considered the mere minimum of rot at the metro police. The media simply do not report on all of its corrupt activities and the pervasiveness of its corruption remains covered up. The problem is therefore exceedingly more serious than what is reported in the media.