WerkNet
Your Family
Your Career
Your Health
Your Money
You and the Law
Occupational Guilds
Solidarity Youth
S-Leer
Home › Corruption › 6. Prasa 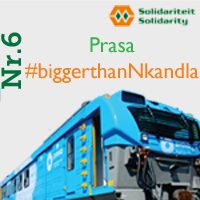 Reeling from recent revelations on a corrupt tender that saw R620 million being wasted on unsuitable locomotives, the beleaguered Passenger Rail Agency of South Africa (Prasa) has been coming off its rails. Articles in the Afrikaans Sunday paper Rapport detailed how former CEO Lucky Montana had benefited abundantly and irregularly from Prasa’s tenders with companies he has ties with. Numerous reports in Rapport outlined the dearth of due process followed in the awarding of property contracts on Montana’s watch.

The paper was viciously attacked by Prasa, but the Auditor-General (AG) has delivered a damning confirmation of Prasa’s iniquities. According to a preliminary summary by the AG of the organisation’s 2014-15 financial affairs, serious misgivings are expressed on expenditure of R3,9 billion. This includes irregular, fruitless and wasteful expenditure.

In one instance, R17 million was apparently spent on rent for a piece of land in Nigel on which a manufacturing plant was supposed to be erected. There was no lease agreement to justify this expenditure. Furthermore, the Ekurhuleni Metro confirmed that they have not seen a cent from Prasa since the deal was concluded.

But this is a mere drop in the bucket. Prasa racked up irregular expenditure of at least R790 million. This exceeds the R38 million of the previous financial year by nearly 2 000%. Moreover, the AG’s summary also shows Prasa failed to appoint an independent entity to monitor the tender process that led to the French Gibela consortium being awarded a R51 million contract to supply it with new passenger coaches.

In a recent damning report titled Derailed, the public protector found that Montana was responsible for large-scale maladministration, abuse of power and wasteful expenditure during his tenure at Prasa. Among other things, she found that Prasa had irregularly extended the amount awarded for tenders for passenger gates to an overall cost of R1,95 billion. She also recommended that a forensic audit be carried out on all Prasa tenders issued between April 2012 and June 2015 (when Montana was CEO of Prasa) that exceeded R10 million.

Montana has since been relieved of his duties, yet he steadfastly professes his innocence and has even laid corruption charges against some of his former high-ranking colleagues.