WerkNet
Your Family
Your Career
Your Health
Your Money
You and the Law
Occupational Guilds
Solidarity Youth
S-Leer
Home › Corruption › 7. False qualifications 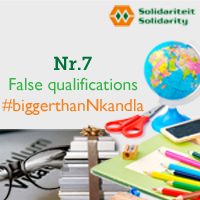 Ever since the ignominious revelations that ANC spokesperson Carl Niehaus lied about his qualifications, many government bigwigs have been outed as qualification falsifiers. Although they do not directly accept bribes or manipulate tenders, they reap the substantial financial and other benefits of their positions solely due to their fraudulent CVs. This is often done with the full knowledge of their superiors, political bosses and boards.

No scandal of this kind was bigger than the one surrounding former Arts and Culture Minister and struggle stalwart Pallo Jordan. It was established in 2014 that Jordan lied about obtaining his PhD and has no tertiary qualifications whatsoever. His fall from grace was swift and embarrassing as he was sacked as a columnist for Business Day. He admitted his sins and resigned as a member of parliament. As the scandal unfolded, the ANC remained defiant in defending this fraud.

More recently, the Head of Engineering Services at the Passenger Rail Agency of South Africa (Prasa), Daniel Mtimkulu, became the latest victim of this organisation’s many scandals. Mtimkulu resigned after an internal inquiry had found he grossly misrepresented his qualification when he indicated he had a PhD in engineering. He has no such degree and is not registered with the Engineering Council of South Africa.

This falsifying scourge was particularly bad at the SABC, where former board chairperson Ellen Tshabalala and COO Hlaudi Motsoeneng count among the ranks of the disgraced after being far less than honest about their qualifications. At the embattled SA Airways (SAA), acting CEO Nico Bezuidenhout and board chairperson Dude Myeni were also exposed for listing fake qualifications on their CVs.

Other than that, former Minister of Cooperative Governance and Traditional Affairs Sicelo Shiceka lied about having a Master’s degree. Former Sanral board chairperson Tembakazi Mnyaka unceremoniously resigned after it was brought to light that she in fact did not obtain a Master’s degree in town planning that was listed on her CV.