WerkNet
Your Family
Your Career
Your Health
Your Money
You and the Law
Occupational Guilds
Solidarity Youth
S-Leer
Home › Corruption › 9. The cabinet and parliament

9. The cabinet and parliament 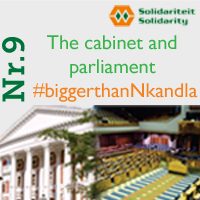 It should be a very worrying sign that the political custodians of the country are engaging in massively corrupt practices and have a wanton disregard for taxpayers’ money. For instance, in 2006, 14 ANC LPs were convicted and fined after pleading guilty to theft and fraud charges due to the abuse of parliamentary travel vouchers. The scandal subsequently became known as Travelgate and also implicated members of other parties. In a flagrant cover-up, parliament decided to write off R12 million owed by the MPs in 2011. National Assembly Speaker Max Sisulu willy-nilly decided that no further action would be taken against 73 implicated MPs. Only six were charged.

Sports Minister Fikile Mbalula grossly overspent (totalling R65 million) on one awards ceremony in 2013. Yet again a dodgy and inflated tender was involved. According to Business Day Live he spent a colossal R110 million on various prize giving ceremonies while sports development at school level is in the doldrums.

High-ranking ANC LP and Minister of Social Development Bathabile Dlamini pleaded guilty to submitting travel claims worth R254 000 to which she was not entitled.

The current Minister of Energy, Tina Joemat Pettersson, also has had serious allegations of corruption and misconduct levelled against her. The Public Protector issued two damning reports in which she stands accused of a conflict of interest. As Minister of Agriculture, Forestry and Fisheries, she irregularly awarded a contract amounting to R800 million to the Sekunjalo consortium to manage the country’s fishing vessels. Legal action was recommended by Thuli Madonsela in her report.

Prominent ANC LPs such as Nathi Mthethwa, Lindiwe Sisulu, Nosiviwe Mapisa-Nqakula, Beaty Dlulane, Mnyamezeli Booi, Lindiwe Sisulu, Ruth Bengu and Humphrey Mmemezi as well as EFF LPs such as Dali Mpofu and Julius Malema have all been implicated in irregular and corrupt practices.