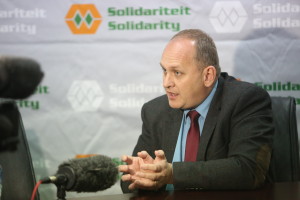 Dr Frans Cronje of the South African Institute for Race Relations recently caused an uproar when he said affirmative action killed babies. This was because of babies who died of polluted water in Bloemhof. This argument can be developed even further.

Affirmative action switches lights off. While we are struggling with load shedding, Eskom approves a race plan based purely on a race quota, having followed a radical race programme in the late 1990s and early in 2000 in terms of which the organisation rid itself of half of its white work force.

Affirmative action encourages crime. If a star in the Police such as Renate Barnard leaves the service because she had to fight for nine years because she could not get promotion owing to the colour of her skin and eventually resigned, only the criminals rejoice.

If the race of a state hospital’s top management and not service to sick people is the transformation criterion, then affirmative action makes people sick.

If the education department transforms the sector so aggressively that skilled teachers cannot be replaced fast enough, resulting in a dysfunctional school system, then affirmative action makes children dumb.

The renowned black American economist Dr Thomas Sowell wrote in his book Affirmative Action around the World that nowhere in the world has affirmative action justified the social disruption of society caused by this policy.

India’s affirmative action programme must be the biggest in the world. After it was intensified, it resulted in large-scale disruption by students who were excluded. Some of the students even set themselves alight out of protest.

In Sri Lanka the Tamils constituted less than one sixth of the population but they were overrepresented in virtually all sectors. When the country became independent, the official language was English. The Sinhalese majority, however, changed the language policy to Sinhalese only and started with an affirmative action programme that benefitted the Sinhalese only. The Tamils felt excluded and a bloody civil war followed. 64 000 people were killed and affirmative action was a major contributing factor.

In the 1960s, revolts erupted in Malaysia as a result of expectations that could not be met. Hundreds of Chinese were killed in the revolts. A climate was created where the Chinese were blamed for the fact that the Bumipitra (the beneficiaries of affirmative action) are still poor and struggling.

This also resulted in large-scale alienation even of the Indian minority, who were also excluded from affirmative action.

An Indian worker on a plantation had the following to say about affirmative action: “Just like the axe marks on the trees, the Malaysian government left innumerable wounds on the Indian minority by denying them work and education, by abolishing their freedom of religion and above all by stripping them of their dignity.”

Dr Mahathir bin Mohamed, one of the architects of affirmative action in Malaysia, after his term of office admitted disappointedly that affirmative action had failed and had benefitted only a small group of people. “These few Malays, for they are still only very few, became rich, not because of themselves but the policy of government supported by a huge majority of poor Malays.”

According to Sowell, in India only 6% and in Malaysia only 5% of those who were supposed to benefit from affirmative action were indeed benefitted.

The world has intervened and the International Labour Organisation’s definition of affirmative action provides that affirmative action should be temporary and that it should actually put matters right. Simple race quotas determined by using a calculator are not defensible internationally.

The United Nations’ Convention on the Eradication of all Forms of Racial Discrimination also provides that affirmative action should not result in different silos of people and that it should not go beyond what is necessary. The United Nations’ human development report recommends moving from race to class. The focus has also started shifting to economic growth and training.

Affirmative action in South Africa has developed into an ideology that believes everything in South Africa, from work places to sport, culture, residential areas and even the private world, has to reflect the country’s racial demography. An ideology, however, does not allow for reality, and this is what leads to disruption. To the ideologists, the price of this disruption simply is sacrifices for the big national idea. Thomas Sowell says racial representivity has not been achieved anywhere in the world, and if something has not been achieved anywhere in the world, it becomes simply a permanent pursuit. Ideology is cruel, because one’s own people are sacrificed ‘temporarily’ to achieve the big ideal (which cannot ever be achieved).

In South Africa we have to struggle against an ideology that disrupts people and that kills people. The rest of the world has come up with much more creative solutions to overcome the consequences of discrimination.

We have to struggle by means of political debating, by mobilising public opinion, by litigating and by using international platforms.