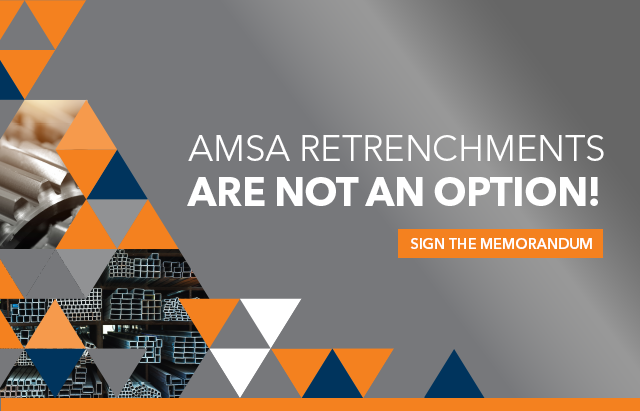 ArcelorMittal South Africa (AMSA) announced on 10 July 2019 that the company intended to dismiss about 2 000 employees. This came as an enormous shock not only to the steel industry but also the community as a whole in the Vaal Triangle. If these retrenchments are to be carried out, thousands of families will be affected.

Solidarity has decided to intervene because this matter is so much bigger than just AMSA – if urgent action is not taken, these retrenchments could be the beginning of many more in several industrial sectors.

Solidarity represented our members at a forum where many stakeholders from the steel and manufacturing industries were present. Your support helped to bring these stakeholders to the table.

The discussions that took place at this meeting were very positive and without doubt a step in the right direction. However, it is important to continue applying pressure on the government to ensure that these talks become action plans.

Your participation to exert this pressure is equally important. Sign the memorandum and raise your voice so government can take note of the urgency of the matter and take action in this regard.

How retrenchments will affect Vanderbijlpark and its people

More about the campaign

Retrenchments are not unknown in the South African steel industry. In 2016, South Africa lost its second largest steel manufacturer, Highveld Steel, when the company closed down and 1 900 employees lost their jobs. Another 13 600 jobs were affected by Highveld’s closure, as many service and product suppliers that used to do business with Highveld also had to close down. The Witbank region was hit hard and the impact on families and the community was enormous.

The steel industry in South Africa has been in a downswing phase for several years as a result of poor economic growth, imports and dumping of steel from China, high electricity tariffs, costly raw materials, rising transport costs and reluctance of the South Africa government to react quickly to a crisis. ArcelorMittal is only one of several manufacturers in the sector who are struggling. Columbus, Samancor, Afarak Mogale, Duferco and South 32 are also experiencing tough times. At the present rate, South Africa could lose its entire steel manufacturing sector if drastic action is not taken to save the steel industry.