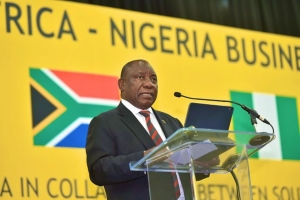 Solidarity today welcomed the announcement by the ANC’s National Executive Committee (NEC) to place greater focus on the private sector as a saviour of the economy.

On Wednesday the NEC briefed the media on the outcome of its recent meeting which focused on the state of the economy, and more specifically that of state-owned enterprises. The NEC announced, among other things, that a greater focus on the private sector is needed to save the economy.

In his response to this announcement Connie Mulder, head of the Solidarity Research Institute, said: “Solidarity has been of the opinion for a long time that no government interference is the best form of government interference in an economy. That is why it is encouraging for us that, ideologically, the ANC is moving in the direction of the free market, where prosperous countries already find themselves.”

However, Mulder expressed his concern that Minister Mboweni’s economic plan would be referred to the SACP and Cosatu for enrichment: “Communism has not yet enriched anything it has touched; it has rather impoverished it. We call on the ANC not to dilute the plan to dance to the tune of ideologists. The ANC should much rather respond to the distress cries of the rest of South Africa which is in an economic dead end.”

With specific reference to the South African Airways (SAA) Mulder explained: “The position around the partial or full privatisation of state entities is one Solidarity has held for a long time. Insistence on a strategic equity partner has been one of our initial requirements put to former SAA CEO Mr Jarana, and it is also included in our current business rescue plan for the SAA. We believe business should be left to business and that, as far as possible, bureaucrats should stay away from it. Partial or full privatisation has worked in Telkom’s case, and will work when it comes to other state enterprises, provided that government applies itself to it with the necessary commitment.”

However, Mulder pointed out that there is a material difference between words and deeds. “While it is encouraging that Minister Gordhan and the new board are moving in this direction, we will only believe it when we see it.”

In conclusion, Mulder emphasised just how material this policy shift is for the ANC: “It seems that Pres Ramaphosa and Min Mboweni realise the gravity of our economic reality. The big question, however, is whether they would succeed to get their comrades, who are still sitting comfortably on the gravy train, on the same page. While South Africa knows that radical economic intervention is needed, the ANC still needs a wake-up call as far as economic policy is concerned.”