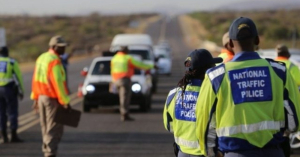 BusinessLive reports that the long arm of the law is getting hi-tech, with motorists and traffic officers to be under big brother’s watchful gaze by means of body cameras and drones.

Body cameras will allow every interaction between a traffic officer and a motorist to be recorded, deputy transport minister Dikeledi Magadzi said in launching the Easter Arrive Alive road safety campaign last week. To be rolled out by the Road Traffic Management Corporation (RTMC) over the next three to five years, the body cameras will help improve the conviction rate for violations of traffic laws and combat corruption.

“Starting this Easter, there will be nowhere to hide for those who live beyond their means and finance their lavish lifestyles through bribes, at the expense of law-abiding citizens on the roads. Traffic law enforcement will stop being an enrichment scheme for the unethical, unscrupulous, greedy and corrupt officers who undermine our efforts to bring discipline on our roads and arrest the carnage,” Magadzi said.

The Department of Transport plans to also strengthen its e-law enforcement by using drones that will identify motorists driving recklessly. Officers will be deployed strategically to respond, using the live intelligence supplied by this technology. Consultations are ongoing with justice, crime prevention and security stakeholders to ensure that evidence gathered through the use of drones is admissible and leads to a higher conviction rate.