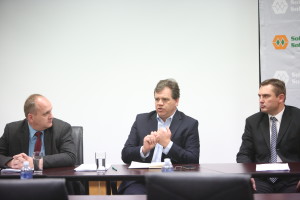 There are direct similarities between the current spate of student protest action and the Marikana incident that took place in August 2012. This warning comes from Solidarity General Secretary Gideon du Plessis. Du Plessis also warned that if student protest leaders should continue to stir up strife and to romanticise violence and anarchy, the same tragic events as during the Marikana incident could occur on campus as well.

“Over the past few weeks, the run-up to the events on campuses have been the same as at Marikana. Just like the protesters on campus, the Marikana protesters were allowed to violate the Riotous Assemblies Act. During the Marikana protest marches, violence and looting escalated after every mass meeting until it could no longer be defused peacefully,” Du Plessis said.

Du Plessis said another parallel between Marikana and the recent campus violence is that outsiders with a strong political agenda are trying to convince individuals directly involved in the conflict that they are fighting for a noble cause.

“These individuals convince the protesters that rioting, not peaceful negotiations, is the only way forward. The EFF and the Workers and Socialist Party (WASPS) are pretty central to current events on the various campuses. After Marikana, the actual “winners” were militant groupings who worked behind the scenes and came forward from behind their hidden agendas after those tragic events that made world news,” Du Plessis said.

At Marikana it was actually the more susceptible younger generation who took the lead during the violent protests. “In contrast, the older members of the various interested parties were duly concerned that the behaviour, actions and means of dispute resolution were unacceptable. The latter also became clear during the campus violence when representatives of stakeholders such as the ANC, Cosatu and Solidarity met this week to find a joint solution for the campus violence,” Du Plessis said.

Du Plessis said the current phenomenon on campuses by which noble demands are being proffered but with instability as the ultimate goal, gives rise to most of the concern as irreparable damage will be the result. “The Marikana unrest continued for 18 months as its devastating effect and hidden agendas were surfacing. The Marikana tragedy also created the climate for the devastating five-month strike in the platinum industry that followed it,” Du Plessis said.

Du Plessis also warned that those who, with their hidden political agendas, are inciting students to protest and violence, must now be identified and isolated, thereby preventing the devastating ripple effect it will have. “Ultimately, violent protest action hurts those who have fallen for the hidden agendas most. To this day, the Marikana warriors are negatively affected by a declining mining industry, unemployment, the decline in mining investors, incessant instability and the physical destruction of infrastructure, to name but a few examples,” Du Plessis said.

Du Plessis concluded: “The recent firm statement by University of Pretoria Vice Chancellor, Prof Cheryl de la Rey, that no further unrest would be tolerated and that the rule of law would be restored, has to be welcomed and supported. Had mining heads and senior police officials adopted the same stance at an earlier stage, Marikana would never have happened,” Du Plessis said.

“The main instigators want a second Marikana to feed off the emotions and instability following such an incident – and that cannot be tolerated.”

Parallels and similarities with Marikana:

Current process at universities to date

Marikana events which could also take place at universities: