WerkNet
Your Family
Your Career
Your Health
Your Money
You and the Law
Occupational Guilds
Solidarity Youth
S-Leer
Home › Press Releases › Constitutional Court: Hlaudi Motsoeneng must cough up 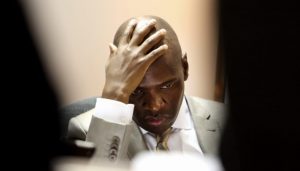 Ten ConCourt judges unanimously found that Hlaudi Motsoeneng must pay the legal costs of trade unions Solidarity and Bemawu that represented the SABC 8 in their case in the Labour Court over their unlawful dismissal.

According to Solidarity Chief Executive Dr Dirk Hermann, the parties’ total cost could amount to between R1,6 and R1,8 million.

This comes after Motsoeneng had approached the Constitutional Court for leave to appeal against an earlier ruling of the Labour Court.

In 2016 the Labour Court ordered that Motsoeneng be held liable in his personal capacity for the legal costs following the unlawful dismissal of the SABC 8.

The country’s highest court found that Motsoeneng stood no chance of success in that court, issuing another cost order against him.

According to Hermann, Solidarity would immediately proceed to have the final costs of litigation assessed. “Once we have final figures, we will start to collect the costs, or we will start to have Motsoeneng’s assets seized.

“This is the end of the road that led to a historic victory. Hlaudi Motsoeneng must now in person pay the legal costs associated with the court case. This sends a loud and clear message to officials who deal with taxpayers’ money in a reckless way. Hlaudi has now reached the end of the road. One can only hide behind court processes for so long. There is no doubt that he will now have to pay,” Hermann said.

According to Anton van der Bijl, Solidarity’s head of Labour Law Services, Motsoeneng had simply postponed the inevitable from the outset. “The Constitutional Court hardly ever grants cost orders in its rulings except in cases where litigation takes place in exceptional bad faith. This ruling confirms that Motsoeneng’s application was absurd from the outset and that it had no chance of success,” Van der Bijl said.