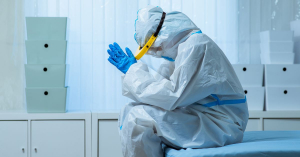 According to the National Institute of Communicable Diseases (NICD), nearly 500 healthcare workers have died from Covid-19 since 5 March 2020. The NICD also mentioned that since the start of the pandemic, 5 424 healthcare workers have been admitted to hospitals of which 846 have been treated in intensive care units. More than 450 of the staff admitted had to receive oxygen treatment, 255 staff members needed ventilators and 577 of the healthcare workers who risked their own lives daily at various hospitals and other medical institutions to save the lives of other South Africans, had to use oxygen treatment themselves as well as ventilators to overcome their battle against Covid-19.

More than 400 healthcare workers are among the almost 15 000 people currently fighting for survival against the Covid-19 virus in South Africa.

Solidarity is particularly concerned with every healthcare worker who, amidst the pandemic, in many instances without the necessary protection, continues to carry out their daily tasks to prevent the mortality rate from rising any further, while putting their own health at risk.

The Solidarity Guild for Healthcare Practitioners already wrote a letter to the Minister of Health, Dr Zweli Mkhize, in March 2020, demanding that stricter and clearer measures be put in place to ensure the health and safety of healthcare workers. According to Henru Krüger, Sector Head of the Professional Guilds, the Minister of Health has not yet responded to the letter.

With the Covid-19 vaccine already available in several countries, the South African government has not yet been able to vaccinate a single person. The US has already started vaccinating its citizens in December and has surpassed the 10 million mark while Israel mentions that they are on course to vaccinate every citizen over the age of 16. It would also be irrelevant for the ANC government to come up with excuses of poverty, especially as emerging markets from poorer countries such as Argentina already have been able to vaccinate 0,2% of their population through proper planning and without any financial assistance to unnecessary state institutions and entities.

The Minister of Health also announced earlier that healthcare workers will receive the vaccine first as soon as the first consignment arrives from India later this month.

However, President Cyril Ramaphosa could not elaborate on this during his last speech in which he informed South Africans that 20 million vaccines were being purchased and that “negotiations are currently taking place”, and he also did not mention when he would have more information.

According to Solidarity there is no clarity whether the private sector, which according to the law has the right to purchase vaccines, will have any access to Covid-19 vaccines. Solidarity further argues that the result will be the state having complete control and thus restrict access to vaccines for the private sector, including pharmacies, medical funds, and private hospitals, and especially the public.

Connie Mulder, Head of the Solidarity Research Institute said that the South African government has appropriated to itself the right to be the sole purchaser of vaccines in South Africa.

“This is the same government that has so far proven over and over again their incompetence during the pandemic. It is unlikely that they will be able to demonstrate the expertise or capacity needed during the roll-out of a massive vaccine programme. By limiting purchases, they are slowing down the process. Especially medical workers and other sectors with excessive exposure will now have to wait for the government instead of having the option of having themselves vaccinated by their own means or by their medical aid.” – Connie Mulder

In the meantime, Solidarity and AfriForum has taken legal action against the government’s proposed monopoly on the purchase and distribution of Covid-19 vaccines, and demand that the Minister of Cooperative Governance, Dr Nkosazana Dlamini-Zuma and the Minister of Health, Dr Zweli Mkhize, urgently provide answers to Solidarity about the government’s roll-out plan regarding the Covid-19 vaccines.

Both Solidarity and AfriForum wants to ensure that those who want to be vaccinated, are not prevented from receiving the vaccine.

According to Mulder, it does not make sense why the government deliberately slows down the process and insists on being the sole seller of the vaccine. He argues that Solidarity and AfriForum are not against the government being allowed to purchase the vaccines but emphasise the fact that we are in the middle of a pandemic and the more vaccines South Africa can obtain, the better.

20 million doses of vaccine are coming, says Ramaphosa – with no details – https://www.businessinsider.co.za/nothing-new-from-ramaphosa-on-vaccine-acquisition-2021-1