Cuba’s own water situation leaves much to be desired 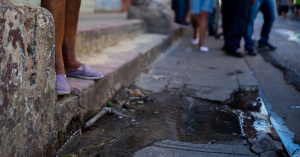 According to Minister Lindiwe Sisulu, Cuban engineers are the answer to South Africa’s water problems. One would have expected then that Cuba’s water situation would be of first world quality, but this is by no means the case.

Although the solutions the Cubans come up with to deal with their own problems are often resourceful, it is by no means desirable to use resourcefulness as a substitute for efficiency. After all, there is hardly ever a substitute for something that is simply working.

As in most developing countries most Cubans depend on bottled water for their drinking water. Those who cannot afford it, must boil their own water or treat it chemically with chemicals that are rarely available. Most South Africans, at least in the cities, accept that our tap water is safe to drink.

Unlike us, most Cubans do not always have water in their taps. In fact, most people in cities such as Havana depend on a rotational water supply system, similar to our load shedding system. The systems differ insofar as we consider the availability as the norm and then have preparations in place for the absence of electricity. What makes the situation in Cuba different is that Cuban households have to prepare for the two hours every fifth day that they do have water. Then bottles and buckets need to be filled. Most people who can afford it have water tanks on their roofs to store water. Unfortunately, this creates other problems such as mosquitos that breed in the tanks, causing tropical diseases.

Health authorities must then step in where the water authorities have failed. Often water is chemically treated in people’s private storage tanks. When chemicals are not available, officials release small fish in the tanks to get rid of the mosquito larvae. One does not have to be an engineer or even a plumber to know that the presence of these fish will lead to a clogged pipe.

Like the rest of Cuba’s beautiful buildings and infrastructure the water infrastructure is in place, but it is largely dilapidated and non-functional. As is the case with any other post-revolutionary state, Cuba got rid of competent officials as soon as possible to replace them with people who helped make the revolution possible. Needless to say, water works require a different set of skills to the skills required for a revolution. The end result is that almost half of Havana’s purified water goes to waste. This is due to leaking pipes and water leaking from joints – something for which Cuba may well harness the skills of South African engineers and artisans as their methods are clearly not up to the task. Since the Cuban revolution of 1959, little has been done to maintain or upgrade the country’s infrastructure. The last major dam was completed in 1985 when Cuba’s only significant trading partner, the Soviet Union, still existed.

The end result is that people have to rely on water deliveries by cart, often still drawn by animals. Such scenes make it almost inconceivable that Cuba was prosperous before the 1950s. What is even less intelligible is the fact that Cuba, a tropical island, is experiencing water scarcity. By the turn of the previous century Cuba was the world’s largest sugar producer. Sugar farming is extremely water intensive.

Due to Cuba’s lack of dam capacity Havana depends directly on rain to provide water to its people. One would expect that a country that has enough engineers to share with the world would at least be able to solve its own problems.

As everything here is blamed on apartheid, Cuba has its own scapegoat, namely American sanctions. According to Cuban officials, infrastructure cannot be maintained because the necessary materials cannot be imported from the USA – as if the USA has a monopoly on the production of plumbing materials.

Today, the Free State’s water situation is just as bad as it was in the past, with even the larger towns such as Kroonstad often not having water supply and where it is available, it is not suitable for drinking. This group of Cuban engineers have reportedly spent most of their time there to learn English and Sotho.

The current team of engineers will be used, among other things, to save the Vaal River. Between 2013 and 2018 it was also among the items listed by the government when a team of Cuban engineers came here to “help” in terms of the same bilateral agreement. Needless to say, the problem has not been solved.

When the government bid farewell to a group of departing Cubans in 2019, the Deputy Minister of Water and Sanitation, Pam Tshwete, said that our doors and hearts are always open to the Cubans after what they had done for Angola and the ANC struggle. Let us not forget that this is the reason for their presence in the country. It is all about ideology and not about water or any other tangible service. As long as the ANC proves its commitment to the communist ideal every now and then, real service delivery can take a backseat.