WerkNet
Your Family
Your Career
Your Health
Your Money
You and the Law
Occupational Guilds
Solidarity Youth
S-Leer
Home › News Office › Denel: Day of reckoning has arrived 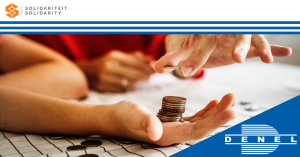 Earlier this week, state-owned arms manufacturer Denel was given only three days to pay the outstanding salaries of all Solidarity members in Denel’s employ. All salaries in arrears must be paid by Friday, 7 August. The order issued by Judge André van Niekerk of the Labour Court not only states that Denel must pay outstanding salaries (from May to June), but also that all deductions for the period April to July must be paid over to the relevant institutions.

Solidarity has instituted this legal action to protect its members against the reckless manner in which Denel deals with the income and lives of hard-working employees, especially since historical problems are the reason why Denel finds itself in this predicament. The circumstances this institution finds itself in cannot be attributed solely to the Covid-19 pandemic as is the case in other sectors and organisations.

“The problem did not arise as a result of the Covid-19 pandemic, but as a result of years of extremely poor management, corruption and state capture.” – Helgard Cronje, sector coordinator of defence and aviation at Solidarity.

According to Cronje, Solidarity is satisfied with the ruling, but is also concerned whether Denel will, in fact, be able to pay the outstanding portions of its employees’ salaries. He also mentioned that the court order only applied to Solidarity and UASA members, and he said he was particularly concerned about other employees that are not members of a trade union and have nowhere to go for assistance during this time of crisis. He believes it is important for all employees to join a trade union that can protect its members’ jobs and interests in times of crisis.

Denel spokesperson Pam Melinda said earlier this week in an interview with Netwerk24 that she was trying to find out whether the outstanding salaries would be paid, but that no-one seemed to know.

Denel’s salary bill amounts to between R140 million and R150 million per month. In the period May to June, employees received as little as 20% of their monthly salaries, while July’s salaries were paid in two separate payments, but employees again did not receive their full salaries.

According to Cronje, Solidarity has lost all patience with Denel. Solidarity understood the problems experienced by the cash-strapped state enterprise, and hoped that the government would step in to develop a workable and sustainable plan to ensure that this institution would be restored to its former glory, but so far no attempt by Denel to turn the institution around has received any support from the government.

Judge Van Niekerk mentioned in his ruling that from the institution’s history, it was clear that it had neglected its duties towards its employees.

Solidarity has more than 900 members at Denel who are still working although they are not paid their full salaries. The dedication of these men and women speaks volumes of their integrity as employees and as human beings. Therefore, Denel should not only compensate them for the work they do, but their services should by highly valued. At a time when the skills required by Denel of its employees are becoming increasingly scarce, one would think that an institution once considered to be one of the best in the world would put in more effort to take care of its employees’ financial well-being, to prevent their services being lost in a competitive work environment.

According to Cronje, Solidarity will be forced to follow either or both of two routes if Denel fails to pay the salaries that are in arrears. This includes enforcing the court order by requesting a warrant for execution and seizing assets belonging to Denel, or Solidarity may decide to lay a charge of contempt of court against Denel’s Board, which would amount to a criminal offence. The latter offence could mean that Denel’s Board is held accountable in their personal capacity, which may lead to fines and even time in prison.

According to Cronje, Solidarity won’t hesitate to go through with these actions, and Solidarity will follow both routes to protect Solidarity members. Solidarity is determined to hold Denel accountable.

Solidarity is also concerned about future salary payments and warned Denel and the government to make a concerted effort to reverse the institution’s financial position, not only to ensure the future of its employees, but also to make the institution a respected competitor in the international weapons industry once again; one in which South African can take pride.