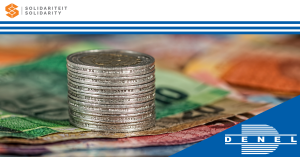 “There is still some uncertainty about exactly what has been paid and what not. According to feedback we received yesterday, medical aid contributions were paid, but not PAYE tax, UIF contributions or pension fund contributions for June,” said Helgard Cronjé, Solidarity’s Sector Coordinator for Defence and Aerospace.

The historic financial mismanagement and consequential liquidity challenges pushing the arms manufacturer further into the abyss every day, once again confirm that the ANC government is unnecessarily dragging its heels because it does not realise the gravity of the crisis.

In April 2018, Solidarity disclosed the so-called Denel Dossier. In it, numerous counts of mismanagement and even corruption by members of the previous management, which led to Denel’s financial woes, are documented.

A forensic investigation was also undertaken. In 2019 Denel confirmed that it intended to take action against those involved. However, Solidarity has not received any confirmation of any such steps, and those who should be called to account have still not been brought to book.

“Solidarity is most upset by Denel’s inability to communicate proactively with its workforce when it comes to challenges of this nature. The legal action Solidarity is currently considering is to hand over Denel to the relevant financial authorities for its defaulting,” Cronjé said.

On Monday, Denel will meet with the employees’ pension fund, Denret. “Trade unions have already scheduled a follow-up meeting with Denel to ensure actual liability, and we will not hesitate to take the necessary action to protect the interests of our members,” Cronjé concluded.

The impact of sport on people and the community