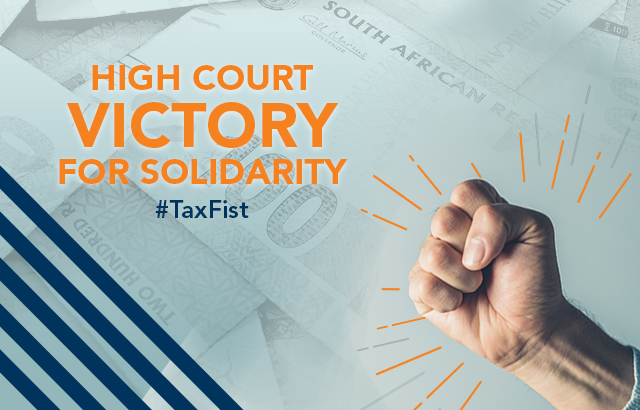 Denel is one of the struggling state enterprises who repeatedly received bailouts from the government to keep them afloat; bailouts which the tax payer must finance.

After the recent court case in which Solidarity took the arms manufacturer Denel to task, the ruling has been in favour of Solidarity, its members and all the people who supported the case. The High Court ruled that Denel must urgently comply with statutory regulations regarding their employees. Denel is now forced by the High Court to pay over the unemployment insurance fund money and tax which were deducted from employees’ salaries over several months.

This win is huge and is part of Solidarity’s tax fist. Thank you for supporting us in making this win possible. We now move on to the next state enterprise and continue to say no to tax looting. Watch Solidarity and become part of our tax fist and the lawful tax protest!

What will happen now:

Failed state entities gobble up billions of rands every year. Yet, the state is still recklessly investing your tax money in those enterprises. That is why Solidarity came up with a five-point tax fist.