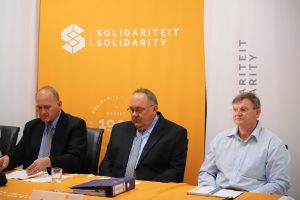 Trade union Solidarity today launched a skills bank on its website https://solidariteit.co.za/en/eskom-knowlgedge/ where engineers and technicians can register so their skills can be re-recruited to help alleviate the crisis at Eskom. The creation of this knowledge bank comes in the wake of announcements made by Pres Cyril Ramphosa and Public Enterprises Minister, Pravin Gordhan that the services of competent former Eskom employees, locally and abroad, should be used to help alleviate Eskom’s skills shortages.

Solidarity offered its assistance and called on all South Africans to make Eskom’s rescue a national project. However, Solidarity Chief Executive Dr Dirk Hermann, said the condition for such assistance is that justice prevails. Solidarity called on Pres Ramaphosa to appoint a commission of inquiry under the chairmanship of a judge to investigate the crisis, mismanagement and corrupt activities at Eskom. According to Solidarity, the commission’s terms of reference must be such that the findings could be referred to the National Prosecuting Authority for prosecution.

Solidarity plans to propagate the skills bank widely among its members, former members and their networks. “We plan to post it on overseas groups, and we call on South African embassies and missions to help register South African skills so we could have the opportunity to re-recruit them. Many of the experts are abroad for the time being only and would be keen to offer their skills in South Africa instead. Thousands of retired engineers and technicians in South Africa are also ready to offer their help,” Hermann said.

According to Solidarity, the best investment that can be made in Eskom right now is an investment in top skills, even if it is only for the interim to ease Eskom out of its crisis.

Hermann also said Solidarity would give their all to keep the country’s lights on. During the previous Eskom crisis Solidarity members had slept in power stations to help ensure Eskom had power supplies. They did so not because Eskom had shown them loyalty, but they did it out of loyalty to their country.

They will do so again, but then current employees must at least have security. It is the employees at power station level that keep Eskom going; not top management – they make the wrong decisions.
Solidarity also warned that packages and retrenchments would result in even more skilled workers leaving Eskom. The best people will leave first.

Eskom cannot afford the loss of a single skilled member of staff. If technical staff are now unsure about their jobs they will leave for safer companies, nationally and internationally, where major shortages of skilled staff are experienced.

As far as staff is concerned a proper skills audit must be done. Skills mismatches must be identified and rectified.

The immediate cost savings lie in the cancellation of totally inflated tenders, the aggressive stamping out of corruption right down to power station level, and the changing of procurement processes, while on the revenue side, outstanding debt must be collected.

“As workers we are furious about the mess Eskom finds itself in. Despite this anger we realise that Eskom’s crisis is our crisis that involves all of us. That is why we want to offer our help. We will help to re-recruit top skills; our members will help to keep the lights on even if they have to sleep in the power stations. We call on the public to help save electricity and we appeal to big business for help. We call on everyone in South Africa to make Eskom’s rescue a national project involving all of us. However, we set one condition and that is justice. The looters must not get away scot-free,” Hermann continued.

In exchange for our help we expect a commission of inquiry into the Eskom crisis. We, as South Africans, will not be content to sit in the dark while the looters get away, having enriched themselves.