WerkNet
Your Family
Your Career
Your Health
Your Money
You and the Law
Occupational Guilds
Solidarity Youth
S-Leer
Home › Press Releases › Evidence suggests, NHI dream will be a disaster

Evidence suggests, NHI dream will be a disaster 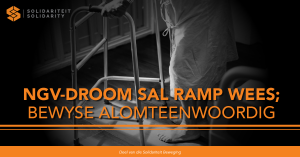 Solidarity today expressed its concern about the precarious state of health care in the public sector and argued that the implementation of the National Health Insurance (NHI), as confirmed by newly appointed Health Minister Dr Zweli Mkhize, will only bring large-scale and far-reaching disaster for South Africans.

Morné Malan, senior researcher at the Solidarity Research Institute (SRI), explained: “Last year, we heard about the Life Esidimeni scandal, the Charlotte Maxeke Hospital crisis, reports from the Office of Health Standards Compliance (OHSC) indicating that only 1% of state hospitals comply with basic requirements, and we heard about crises in the North West Province and elsewhere. Now we hear about fires at hospitals in Durban, violence in Gauteng hospitals, patients tied to chairs in Mamelodi, terrible conditions in Ga-Rankuwa, and staff shortages across the country. What would have to happen before the governing party realizes it is incapable of managing health care?

Solidarity announced its support for expanding private sector services to make them more affordable and accessible to all South Africans. “Instead of punishing an excellent private sector by a de facto nationalisation of health care, the skills and systems that are in place in the private sector should be used to improve the system so everyone can make use of it,” Malan said.

“As the Occupational Guild for Health Practitioners we are truly concerned that government can believe that a centralised health system such as the NHI is the solution to deliver quality health care. The NHI will push our health practitioners, who are already under huge pressure, over the edge. As a guild, we will therefore carry on acting as a watchdog on the one hand, while on the other, we will continue to present workable solutions to our members that can make a real difference in the profession,” says Hennie Bierman, Head of the Solidarity Occupational Guilds.

For the sake of the health of all South Africans, Solidarity cautioned government to set aside its obsession with state control and equality. Malan concluded: “It is clear that government is more concerned about equality in care than it is about the quality of care. It’s not about rich versus poor; it’s about sickness versus health, and the public sector, which is already in intensive care, is now trying to infect a healthy private sector in the hope that the death knell of private health care services would bring about the revival of state-controlled services. It just doesn’t work like that.”