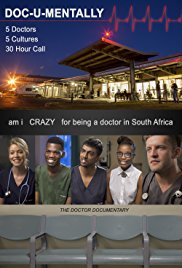 ANA reports that the locally produced film Doc-U-Mentally – which highlights the extreme pressures junior doctors face in South Africa – will be released globally on Monday via Amazon, iTunes and Google Play.

Nicole Jennings, spokesperson for one of the sponsors Pharma Dynamics, said:  “We believed in the message of the film from the word go and knew it would serve as a strong catalyst for change by giving viewers a glimpse of the kind of trauma and mayhem medical interns are exposed to in SA.  Having the film available on international platforms such as Amazon and the like will also help give a voice to doctors in other countries who face similar challenges.”

Asked to comment on the film, the national Department of Health spokesperson Popo Maja said he was not aware of the global release of Doc-U-Mentally.