WerkNet
Your Family
Your Career
Your Health
Your Money
You and the Law
Occupational Guilds
Solidarity Youth
S-Leer
Home › News Office › Flip Buys chats to Jan-Jan: “Will South Africa be okay?”

Flip Buys chats to Jan-Jan: “Will South Africa be okay?” 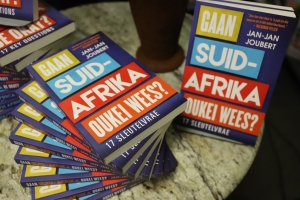 What is the future of Afrikaans? Can Eskom be turned around? What does our economy need? What about emigration?

Guided by 17 crucial questions hurled at him by the public, the seasoned political journalist Jan-Jan Joubert looks at the pressure our country is experiencing in his new book Will South Africa be okay? The book hit the shelves on 1 November.

In this book, Joubert looks at the burning issues that could determine our fate. Will South Africa be okay? is good, well-researched reading matter for all South Africans who want to be informed and who care about the future of the country.

Flip Buys, chairperson of the Solidarity Movement, spoke to Joubert during the book launch of the Afrikaans version, “Gaan Suid-Afrika oukei wees?” in Pretoria.

Since Ramaphosa moved into the Union Buildings, unemployment rates have rocketed. The economy is not growing. With Eskom only just managing to keep the lights on, populism that pops up everywhere and the proposed national health insurance, South Africans in increasing numbers are seeking greener pastures abroad. How do we know the country is not going to tumble down the abyss this time?

Following the ANC’s victory in the 2019 election, President Cyril Ramaphosa’s mandate is stronger than ever. He can now keep his promises to weed out government corruption. In Will South Africa be okay? Joubert asks whether Ramaphosa is indeed going to be successful and what this would mean to South Africa and its people. What does South Africa’s future look like with challenges such as the land debate, racial tension and the economy in a parlous state? Will South Africa be able to survive and flourish in the midst of unrest?

Joubert discusses all these questions and also shares very interesting information on this year’s election.

Buys sees the best part of the book as the chapter where Joubert lists a number of steps the Ramaphosa government should be doing. He starts off with the premise that economic growth has to take place before there can be redistribution. In this way, he puts the free market view against the socialist view. Buys encourages people to read this chapter, where Joubert sets out an excellent recipe: “Should government follow this, the result as measured in economic figures will be much different.”

“South Africa is going to be OK if everyone, including government, does their duty. But it begins with ourselves,” Joubert says.

According to Jan-Jan, being OK isn’t a point that is reached, but an ongoing process of adaptation. One always has to grow.

And what do you have to do to be OK?

The solution begins with yourself. Everything is going to be OK – if everyone does their bit.