Your Job
Your Family
Your Career
Your Health
Your Money
You and the Law
Occupational Networks
Solidarity Youth
S-Leer
Home › News Office › Focus on the scoreboard, not on the team photo 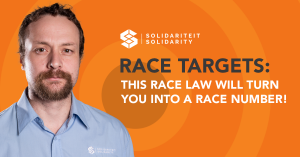 South Africa is not winning. When looking around it is clear that what you see is not what “winning” looks like. Load shedding, potholes, crime, unemployment, poverty and state capture are all signs of a country that is losing. The reason for this decay is so simple – the scoreboard does not matter to the ANC government, as it focuses only on the team photo.

As long as a state institution employs enough black people, it does not matter to the government what outcomes that institution achieves. This obsession with race has eroded all institutional knowledge at government departments and state institutions. The fatal combination of incompetent officials and competent scoundrels has thrived in this vacuum. The consequences of the ANC’s race-obsessed policies are that the country has quite literally been robbed blind while the state’s ability to prosecute corrupt cadres has been destroyed.

Despite the implosion of the public sector the private sector has so far managed to remain a model of excellence in numerous instances. As the police’s ability to prevent and fight crime disappears private security services have come to the fore. As public health care services let women give birth on hospital floors private medical care has stepped into the void, still offering world-class health care. The private sector focuses on the scoreboard.

At the moment, harsher black economic empowerment legislation is lying on Pres Ramaphosa’s desk, waiting to be signed. It is one signature away from coming into force. The purpose of this new legislation is simply to replace what works in the private sector with what does not work in the public sector – forcing the private sector to focus on the team photo rather than on the scoreboard.

A valid question then quite simply is – why is the ANC government doing this? Can they not see that the country is collapsing as a result of their policies? The answer can be found in the Minister of Labour’s speeches on the subject. In his speeches he regularly rants about white people who are still over-represented in the labour market, especially at top management and senior management level. Self-regulation by the private sector has seemingly failed completely, and the state has no choice but to intervene to prevent a situation where black people are being excluded from the labour market. The figures used by the government are based on the yearly report of the Employment Equity Commission. In this report, skin colour is counted in the finest detail. It reports in the finest detail on how many persons of what skin colour are employed at each skills level in each sector. Again, the focus is only on the team photo with no understanding of what is happening on the scoreboard.

The greater problem is that the report itself is based on research that is exceptionally flawed. Yet, this forms the basis on which race legislation is justified. The total number of employees whose race and job level the report deals with comes to 7 million. According to Statistics South Africa (SSA), there are currently 14,9 million people employed in South Africa. Although the report deals with less than half of the working population, the legislation applies to all.

Moreover, there is a particularly narrow focus on top management and senior management level where black persons are under-represented. These two levels together represent about 200 000 persons, or 2,8% of the employees reported on. The skilled, semi-skilled and unskilled levels are where 80% of employees find themselves at. At these levels, black people are over-represented, as the figures in the report itself indicate. Any notion of broad exclusion of black people from the economy is refuted by the report’s very own figures which show that the overwhelming majority of people working in South Africa reflects the country’s demography.

The minister complains about the less than 3% of employees and then promulgates laws that give him powers to set targets for 100% of the employees in the country. This legislation is therefore by no means about broad empowerment but much rather about narrow enrichment. 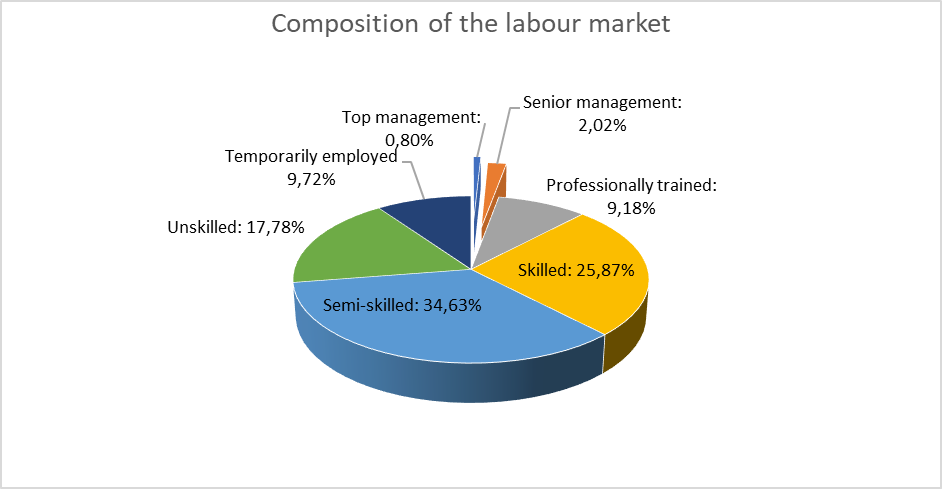 In South Africa it is almost inconceivable that any legislation dealing with the labour market would be promulgated that does not focus exclusively on addressing the huge unemployment crisis. South Africa currently has 7,8 million unemployed people and a further 3,7 million who, for sheer despair, have stopped looking for jobs. Realistically, this is what South Africa’s scoreboard looks like – 12 million adults without a job. Any legislation which seeks broad empowerment should focus on helping unemployed people to find jobs rather than to move the chairs in the team photo about – yet the latter is precisely what this legislation does. Rather than focusing on expanding the economic cake so that everyone can get a decent portion, laws are being promulgated to ensure that the cadres get the best crumbs.

The new legislation’s narrow focus to enable the minister to set targets for the private sector has only one goal in mind and that is to make rich black persons richer, and ultimately the poor among us will pay the price for it by being excluded from a shrinking economy. The ANC government simply wants to force the private sector to make room for ANC cadres no matter at what cost.

How does it affect you?

The new race legislation gives the minister the powers to set race targets per sector and skills level and every single business in that sector will then have to meet those targets, otherwise they may not be able to do business at all with the government at any level.

You may think that your business does not depend on the state, but the harsh reality is that this legislation will have an enormous impact on the entire value chain. The South African government’s budget constitutes about one third of the country’s total gross domestic product. Your business might not be doing direct business with the state, but many of your clients may well do so. These clients will be under tremendous pressure from a minister who will tell them what the team photo must look like, irrespective of the scoreboard.

Central planning of an economy has been tried out before – it resulted in poverty and famine and millions of deaths. This legislation gives the minister, sitting in an office in Pretoria, the power to stick his nose in the affairs of every business and to prescribe to businesses what the people should look like who work there. We have a duty to say “no” loud and clear, to push back and to say, “enough is enough!” We deserve to live in a winning country, to raise our children in a winning country and to pursue our dreams in a winning country. The only way South Africa can become a winning country is if we start to focus on the scoreboard regardless of the team photo. The government is not going to do this itself; we will once again have to force the government to do the right thing.