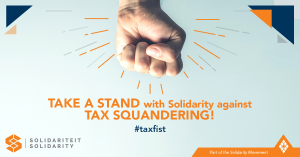 The tax looters, Brian Molefe and Hlaudi Motsoeneng’s debt to Solidarity that have already been paid amount to approximately R1,3 million and will be used to tackle similar tax offenses.

This follows Brian Molefe, former CEO of Eskom’s payment of the outstanding amount of R283 758,96 to Solidarity to finally settle the total amount of just less than R800 000,00 he owed. On Friday, Solidarity also, in response to a letter they addressed to the Eskom pension fund wherein they requested the fund to immediately proceed with the collection of the outstanding amount, received confirmation from the fund that they will proceed with a declaratory order to collect the debt they are owed. However, the National Prosecuting Authority (NPA) has not yet confirmed whether they will continue with the prosecution of Molefe.

The SABC’s former Chief Operating Officer, Hlaudi Motsoeneng, made his last payment of R20 426,00 in August to Solidarity. This comes after Solidarity started with a process at the end of 2018 to seize Motsoeneng’s goods. Ten judges from the Constitutional Court unanimously found that Hlaudi Motsoeneng must pay the legal costs to the trade unions, Solidarity and Bemawu, who represented the SABC 8 in their case in the Labour Court about their unfair dismissal. After delaying, Motsoeneng finally repaid the total cost of R460 426,77 to Solidarity.

Solidarity decided to use the money they received from Motsoeneng and Molefe for cases that address tax abuse. “Solidarity’s Legal Fund together with the contributions made by Molefe and Motsoeneng, make it possible for us to tackle future cases of tax looting and in that way hold reckless people who waste tax money accountable,” said Anton van der Bijl, Head of Solidarity Legal Services.