HRC must investigate racism in the SAPS – Solidarity 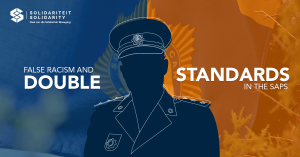 The request follows a report by the Solidarity Research Institute (SRI) which indicates that there are systemic problems regarding racism in the SAPS. The report has also been handed to the SAPS with a request for urgent action.

“The tendency of false accusations of racism in the SAPS is appalling. The report also addresses the emotional impact on victims. The SAHRC acts forcefully and on its own initiative on allegations of racism and the use of unacceptable race terms if it happens to be white on black. The reaction of the SAHRC on this report will be an important test for its objectivity,” Dr Dirk Hermann, Chief Operations Officer of Solidarity, said.

During October, 56 cases of alleged racism and double standards regarding the handling of racism has been reported to Solidarity which indicate that members of certain races in the SAPS are working under unbearable circumstances with no consequences for those who make false accusations, but consequences for the victims of the lies.

“The findings indicate a pattern in the way in which SAPS members are treated: Firstly, grievances and false accusations of racism against white members are submitted after they have disciplined subordinates or simply because they are white. It was also found that if the accused are found innocent, those who spread the lies are not reprimanded after which the accused suffer extremely negative physical and emotional results,” says Annelise de Vries, a researcher at the SRI.

The report will also be submitted to the SAPS with a letter of demand to act strongly against those who make these false accusations.

Solidarity further approached the SAHRC to investigate and take steps to ensure that the human dignity of all members of the SAPS is protected.

Renate Barnard, Sector Coordinator at Solidarity concludes: “These members are continuously exposed to serious accusations and disciplinary action, as well as grievances against them just on the grounds of their race. If these members try to apply disciplinary measures, they are falsely accused on grounds of racism and other serious misconduct. Subordinates and colleagues are harassed merely on the grounds of their race, they are not promoted and they are even threatened that they would lose their jobs. It is unacceptable that people are exposed to double standards and that their rights are not protected by their employer.”