In the city of the “Reformation” to talk about “transformation” 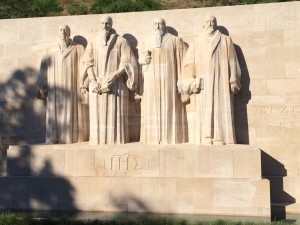 The United Nations’ European Headquarters in Geneva is one of the city’s most famous landmarks. The UN’s Palais des Nations (Palace of Nations) is photographed from all corners by tourists and visitors, soaking up the last days of the European summer. When you look around you, you realise that Geneva is indeed a city of nations. On every street and corner you hear a different language and you see people who obviously come from other countries.

A little further on, in the old city of Geneva, you’ll find the Reformation Wall erected to commemorate some of the great Reformers, including John Calvin. Calvin spent most of his life in Geneva and has left an indelible mark on the city.

As we were walking, I couldn’t help but smile at the irony of us being in the city of the Reformation to talk about transformation. In a way, we are also on a quest for reformation – certainly not Calvin’s Reformation, but in a sense, a similar process. Our goal is to reform affirmative action in South Africa to align it with the principles of the International Convention on the Elimination of All Forms of Racial Discrimination.

Today, the first couple of meetings on the first leg of our visit took place. The meetings were extremely valuable, informative and most definitely successful. On the one hand, we managed to explain, within limited time, why we believe government’s racial policy is wrong. On the other, we could explain why we are indeed being patriotic with the rollout of our UN strategy, namely because we want government to revisit affirmative action and to correct it for the benefit of all South Africans.

Our first meeting was with a representative of the Office of the Special Rapporteur on the Rights of Indigenous Minorities. It was a positive meeting, and we could state and support our case on the basis of our shadow report. Our exposition and explanation of government’s affirmative action programme, and the effect of the quota system on minorities were well received.

We could lay the foundation for future liaison with the Office of the Special Rapporteur with a view to help facilitate a special visit (fact-finding mission) of the rapporteur to South Africa. An important outcome of such a visit would be that the rapporteur would be able to come up with a report revealing to the international community the adverse effects of the ideology of representivity and government’s affirmative action programme on indigenous minorities. Such a report could help pressure government to revisit its policy on affirmative action.

Our second meeting took place with a representative of a department within the UN’s Human Rights Commission that specifically focuses on minorities, equality and non-discrimination. These talks made us acutely aware of how essential it is to engage with UN and CERD players with a view to networking.

It was also important to obtain confirmation that the exposition and approach of our report fits in nicely with the idiom of, and speaks the same language as those who will judge its contents. With this meeting we could lay the foundation for a special request to CERD to be a participant on the occasion when government will defend its report to CERD in 2016. If our special request is granted, it will give us the opportunity to meet government physically at an international forum and to have a dialogue of thoughts and ideas as well.