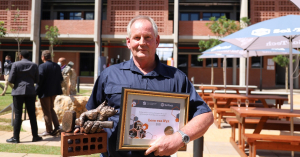 Sol-Tech took its first small step in 2007 when the institution opened its doors to 64 students and with only three staff members.

Leon van Wyk was appointed as lecturer among the members of staff appointed to train the artisans of the future. It was Leon’s responsibility to establish Sol-Tech’s mechanical training. According to Leon, he found fulfilment in his passion for training and was ultimately responsible for the first group of mechanical apprentices obtaining their qualifications through Sol-Tech.

However, Van Wyk is not just another lecturer and Sol-Tech can be truly proud of him as he is one of only a handful of master artisans left in the country. Leon van Wyk has been involved with the training of apprentices since 1989 and has worked as a training officer at Eskom’s training college for 16 years.

However, before an artisan could become a master, he had to prove specific skills by making by hand a masterpiece, in the literal sense of the word. He also had to prove that he could make the tools of his trade himself and, if in disrepair, he could repair them himself.

Leon already started to live his passion in 1982 when he started his training as a fitter and turner at the then Iscor. After that, he obtained his N3 and N5 qualifications. However, that was not the end of the road for Van Wyk as far as training went.

Van Wyk says he became a master artisan after Eskom decided in 1995 to select a group of 20 electrical and mechanical artisans to undergo master craftsman’s training, offered for the first time in South Africa in collaboration with Germany and Unisa.

According to Van Wyk, he was so privileged to be one of the group of people who could participate in this programme. The programme was presented full-time for a year and included an examination that consisted of theory, a practical component that had to be completed within 200 hours and an oral examination.

Not only did he complete the course, but he was also named best mechanical student at the graduation ceremony that was held at Unisa. This he considers a great honour, and he is proud of his qualification and the award he had received, which he attributed to his hard work and the fact that he could follow his passion. He admits that it took a great deal of hard work and sacrifice to reach this milestone and that it was achieved thanks to his perseverance.

Van Wyk believes that master artisans do not have enough opportunities in South Africa today to develop their talents and to keep up to date with developments, new technology and international standards and requirements for the profession, while many businesses in countries such as Germany still require specific trades to be managed by a master artisan.

He pointed out that a decision was taken in 2012 that the Meisterbrief (Master Artisan Certificate) is the equivalent of a BA Degree.

“In Germany, the master artisan qualification is the highest professional qualification in the trades. The training includes theoretical and practical training in the relevant trade, as well as business training and legal training.”  – Leon van Wyk, Master Artisan and Sol-Tech lecturer

Van Wyk finds it a pity that in South Africa master artisans fall back to their usual jobs where they are often used in administrative roles, while their real talents, practical experience and knowledge about their specialist area are not utilised to the full.

Van Wyk says he is grateful that he can invest his master’s knowledge in Sol-Tech and that the team at Sol-Tech has already achieved great success as a team. He believes they are able to perform better thanks to a solid foundation upon which one can build further.

His advice to young people who would want to follow in his footsteps is to never stop learning because experience and knowledge cannot be bought.

“If you take a closer look at your trade and you know in your heart of hearts that it is your passion, my advice to you is to find a role model or a master artisan and to then start to learn from that person. Learn as much as you can about your trade.”

Dr Philip Minnaar, principal of Sol-Tech, describes Leon as a dedicated and well-trained member of the Sol-Tech team, mentioning that he has a heart for training. He is a people’s person and will put the needs of others before his own.

His students look up to him and often surprise him by organising a braai to thank him for his dedication and the fact that they can approach him for help at any time. It is true that when Leon buckles down to his work time stands still because he is living his passion, namely the training of the younger generation. This is how he wants to make a difference in the country.

His trade is his heart and soul and that is why he is a master.

If you want to be trained by Leon van Wyk and other brilliant artisans like him, do visit Sol-Tech’s website for more information – www.sol-tech.co.za