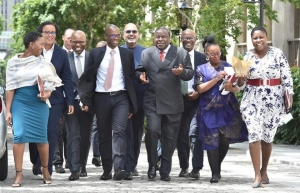 Solidarity today denounced the tendency within government to keep on presenting overoptimistic forecasts and to be found lacking every time.

According to Morné Malan, Senior Researcher at the Solidarity Research Institute (SRI), government should deal with the country’s finances in a more realistic manner and stop living in the clouds. “Compared to the Budget Speech in February, we now see, as we have seen for almost 10 years, that economic growth again has been adjusted downwards, this time by a percentage point, from an already worrying 1.5% in February to a miserable 0.5%”.

Solidarity also expressed its concern about the country’s fiscal situation and the impudence with which inadequate plans are announced. Malan said: “Not only was the forecast of the budget deficit as well as the amount of tax collection underestimated in February, but at the same time we also see that the impact of certain modest proposals to combat spending, such as freezing of performance bonuses for civil servants or the offer of early retirement, was drastically overestimated.”

Solidarity called on government to recognise the seriousness of South Africa’s economic and fiscal situation and also to be realistic about the extent of the solutions required to turn the ship around. “It is simple. We see time and time again how government underestimates our country’s fiscal crisis and puts in place inadequate, often counterproductive, plans which – to make things worse – are then implemented ineffectively,” Malan said.

“Yet, the point where the minibudget is found lacking most is indeed to set out a workable and clear vision for the future. The minister talked about laying the table for a wider debate, but then he fails to make any concrete proposals in this regard,” Malan concluded.