WerkNet
Your Family
Your Career
Your Health
Your Money
You and the Law
Occupational Guilds
Solidarity Youth
S-Leer
Home › Press Releases › Molefe coughs up the money, bit by bit

Molefe coughs up the money, bit by bit 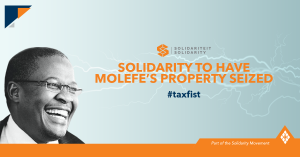 Solidarity’s legal team today gave yet another urgent instruction to the sheriff to proceed with the seizure of Brian Molefe’s property to pay the outstanding legal costs of approximately another R200 000 owed to Solidarity in terms of a court order.

“Mr Molefe is running out of time. So far, he managed to keep the sheriff at bay by paying the money in bits, while he is actually just buying time. If he fails to pay the outstanding money to Solidarity the sheriff will be at his door again and he will be forced to part with property to pay our legal costs,” Anton van der Bijl, Solidarity’s head of legal services said.

Last month, Molefe went to the Constitutional Court to have, among other things, the cost order against him set aside. His application, however, failed.

Solidarity has not heard anything about the “aggressive” legal action the Eskom Pension Fund intended to take to recover the approximate R10 million Molefe owes the fund. Solidarity today issued a letter to the Fund, asking to have feedback on the steps taken in this regard.

Van der Bijl believes Molefe is struggling to come up with R200 000, not to mention the millions owed to the Eskom Pension Fund. “Moreover, we are still waiting for confirmation from the National Prosecuting Authority (NPA) as to whether the NPA will proceed to prosecute Brian Molefe. Justice will, however, catch up with him. Solidarity is ready to take action,” Van der Bijl concluded.