WerkNet
Your Family
Your Career
Your Health
Your Money
You and the Law
Occupational Guilds
Solidarity Youth
S-Leer
Home › News Office › No, no, a thousand times no! 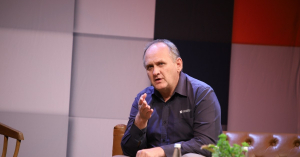 We should never become complacent about it or start to accept it as normal. We should not have patience with the racial abnormalities in South Africa. If an injustice occurs that often, it is easily accepted as normal, and people begin to endure it. However, we dare not tolerate being judged on how we look. I say no, thousands of times no!

A new all-time low was reached in South Africa’s racial ideology when, during a pandemic, aid was granted on the basis of race. The pandemic and the lockdown did not discriminate on the basis of race, but the aid that was granted did. Your need for help was not considered but what you look like was. This is what we have to say no to, again and again, and do so a thousand times.

N.P. van Wyk Louw wrote about the dangers that an entire generation might pass without protest. He writes that protest is even more important than winning a battle. Victory is possible in any battle, but to surrender always means the battle was lost. In every generation’s lifetime there comes a time for protest. If a generation does not rise to the occasion is not only a betrayal of the present generation but also of the next generation.

The government’s racial insanity begs for protest. It does not ask for resignation. We have to say no to this, a thousand times no!

Solidarity is at the forefront of protest against racial insanity. We are not going to abandon our protest. We often appear in South African courts over this insanity, we have already taken to the streets in protest against Sasol’s racist practices and we have successfully put our case to the United Nations. We have to carry on and on. The art lies in perseverance. We have to protest more and more against what is wrong. I am saying no, a thousand times no!

Solidarity is going to lodge complaints against the government with the United Nations’ Committee on the Elimination of Racial Discrimination (CERD) and will submit motions to various European parliaments. A comprehensive complaint has been drafted by South Africa’s top legal experts to be lodged with this UN committee as a formal complaint.

In 2018 the South African Human Rights Commission (SAHRC) released a report stating that the government must adapt the country’s affirmative action legislation to comply with the UN’s recommendation, specifically with regard to racial classification and a more nuanced approach to affirmative action.

The government did not comply with either the UN’s recommendations or with the SAHRC’s recommendations. This now puts Solidarity in a very strong position to lodge a formal complaint against the South African government at international platforms, including the UN and European parliaments.

For a complaint or motion to be successful, two aspects are key. The fist is a strongly substantiated complaint. Our complaint has substance: South Africa is violating the International Convention on the Elimination of All Forms of Racial Discrimination. The country was a signatory to the convention and must thus obey it. We can therefore obtain a ruling against the government.

The second aspect is to be able to prove local support. People by their thousands must collectively say no to racial insanity. The cause of ten people complaining is weak; the cause of 500 000 saying no is incredibly strong. To appear before the United Nations or to submit a motion to European governments that enjoys the support of 500 000 people strengthens our cause immensely.

Now is the time to stand together. The next step is to bring major international pressure to bear on the government. It is now our generation’s time to protest against racial insanity in our masses. We dare not let it become normalised. We must support the international mass complaint in huge numbers. Now is the time to say no, a thousand times no!