No reason for fearing the fourth industrial revolution 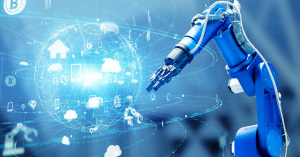 According to Klaus Schwab, the founder and executive chairman of the World Economic Forum, the fourth industrial revolution (4IR) can be described as the unprecedented advances in artificial intelligence, robotics and the Internet of Things (IoT) which refers to the interconnection of computer devices via the internet embedded in everyday objects so that they can send and receive data. It also involves the connection of devices, unmanned vehicles, nano- and biotechnology, 3D printing, energy storage and quantum computing that redefines industries and creates new opportunities.

We are increasingly moving into the time of the fourth industrial revolution and the Covid-19 pandemic accelerated the process. As with any revolution or disruptive change, it is understandable that 4IR is approached with a degree of fear and anxiety. There are especially those who believe that technological advances will eliminate various jobs, tasks, and careers and that all employees will be replaced with robots or computers.

The expression “new normal” is not yet widely accepted. This is a strange concept and does not form part of our frame of reference. It refers to something that we do not understand and that we have not dealt with yet. It speaks of uncertainty. However, the only way in which we will experience certainty or a sense of normality again is to tackle the uncertainty and make it our own.

Although it is not entirely unfounded that computers or robots in the future will play a role in the workplace, a misunderstanding currently exists about the future, as well as the place that employees will play a role in the workplace of the future. Automation, or the use of computers and robots to perform certain tasks, is part of the future of work and plays a role in occupations where a lower level of skills, or repetitive work is required. However, those who have a higher level of training in and for the workplace or their specific occupations are not excluded.

Significant disruptions will affect all industries and entire production and management systems, and will undoubtedly transform all aspects of the 21st century and modern life as we ​​know it today.

The global consulting firm, McKinsey, predicts that the 4IR will replace 800 million workers in 42 countries. Many examples of this type of disruption are already seen in certain sectors such as banking where automation has already begun to take place.

It is debatable whether South Africa is ready for the 4IR, especially since we cannot rely on the government. We should rather ask if we are ready. We must take the responsibility and make sure that we become part of the future where a revolution of knowledge determines each person’s future and where people with the best and greatest knowledge will be appointed in prestigious positions and for which every young person, as well as those who have been practicing their profession for decades, must prepare.

The Solidarity Movement is already preparing for this future. People from different professions and with knowledge of various aspects of their jobs can get involved into building the future.

In South Africa, we need experts who will train people, and establish systems, organisations and regulatory structures to create the right environment for the 4IR.

Investment must be made in human capital. Human capital is the knowledge, and social and personality traits contained in the ability to perform work in order to deliver economic value. Human capital is unique and different from any other type of capital. It is necessary for businesses to achieve goals, develop, and also remain innovative.

We must constantly find new ways to use and secure data so that innovation and future industries will promote the development of platforms and applications for the 4IR in South Africa. In this way, South Africa can still remain relevant and compete with larger countries in the world.

The 4IR is also modernising goods such as vehicles, and electric vehicles are no longer something we only see in movies. These cars and trucks not only cause less harm to our environment, but are cheaper to maintain and can save consumers money. However, to make use of technology, we need to modify and revise the current infrastructure and also build new parts for it that are in line with the 4IR.

Certain legislation will also need to be amended to make way for the 4IR as well as new ways of doing things that are consistent with our modern society.

The 4IR is in our midst and it is important that everyone knows what it entails. It should not be met with fear, but rather be accepted and embraced.

During this time, our focus should be not only on overcoming our fear of the 4IR, but also on preventing future job losses. Man does not like disruption, but over the centuries disruption has always led to progress.

Today, the person who puts him or herself in a position to be trainable and learn new skills, or hone old ones, will enjoy progress. Lifelong learning is an attitude we will have to teach our children.

Man’s mindset will always determine his future. What you focus on is what you eventually become.

The opportunities created by the 4IR must be seized and exploited.