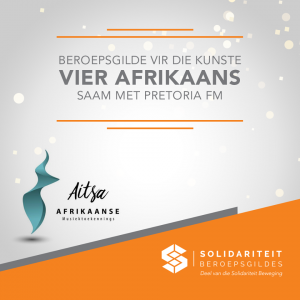 Last night, at the Aitsa Music Awards, the Occupational Guild for the Arts presented its first honorary awards to pioneers in the arts. These prestigious awards focus on the film industry, literature, and arts and culture at school level.

“We are proud of the artists who received the first awards from the Occupational Guild for the Arts. These ambassadors have the power of positive influence in their hands and are considered to be pioneers,” Bierman said.

The celebrity couple Ivan Botha and Donnalee Roberts Botha were jointly honoured as pioneers in the film industry. Bierman believes they write stories together; they dream together; they create together. With stories such as Pad na jou Hart, Vir Altyd and Stroomop they create stories of hope in a life filled with pain. They are an inspiration. Ivan Botha and Donnalee Roberts Botha – keep dreaming, keep creating in Afrikaans, and keep creating hope.

“The guild plans to establish a strong arts community that will assist artists to protect, develop and expand their profession in the Afrikaans arts. The power of the industry must remain with the artists, and the guild will continue to promote and push this,” Bierman added.

Deon Meyer was honoured for outstanding achievement in Afrikaans literature. This fiction author is considered as one of the world’s leading authors with titles such as 7 Days, Thirteen hours, Dead before Dying, The Last Hunt, Cobra and Dead at Daybreak. “He is not just the author of action-packed books, but also of movie scripts such as for Jagveld (Hunting Emma). His books are available in more than 20 languages. As a guild, it is a privilege for us to honour him with this award,” Bierman said.

The third honorary award for excellence in arts and culture at school level was made to Hoërskool Rustenburg. The Occupational Guild for the Arts sought – and found – a South African school that would exceed all expectations, measured by certain criteria. “This school excels in almost all cultural areas. Moreover, they caught the eye of a records company with their version of Bohemian Rhapsody, and they are proudly Afrikaans,” Bierman said.

The Solidarity Occupational Guild for the Arts invites all artists to become actively involved in the activities of the guild to promote a community that is building together, working together and standing together. In this way we can further expand a network of work within the entertainment industry.