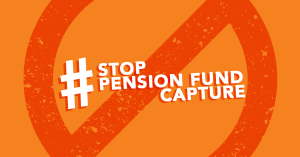 Our members mandate is clear. Protect our pension funds. That is the right thing to do for workers.

It is not the responsibility of workers to fund bankrupt state enterprises. Pension capture cannot address the damage caused by state capture.

Solidarity started legal process to stop the capture of public servants’ pensions. In a letter to the Government Employees Pension Fund (GEPF) as well as the Public Investment Corporation (PIC), Solidarity’s legal team demanded that the Trustees and the Board of these institutions should not accept the controversial plan to finance Eskom from the GEPF.

If Solidarity does not receive such a guarantee, or if a decision is made to implement the controversial Eskom plan, Solidarity will take further legal action, which may include urgent legal assistance.

In the letter, Solidarity called the Trustees’ attention to their fiduciary duties.

Solidarity also pointed out that individual trustees and board members will also be held personally liable for damages if they do not fulfil their fiduciary duty.

The mandate of the GEPF and the PIC is to act in the best interest of the client. The board members and the trustees may not be influenced by the political agreements of other mandate givers. If goals other than the best investment return for the pension fund member are pursued, it will be unlawful.

According to the Solidarity letter, any step or action to use employees’ pensions to save Eskom or any other state enterprise would fall outside the mandate of the GEPF and the PIC, and it will also be a breach of the contractual agreement with the members of the fund.

In no way can an investment in a totally insolvent enterprise be in the best interest of the pension fund member.

The trustees’ mandate is not to solve the country’s major socio-economic challenges. Nor is it their task to stimulate economic growth to create possible secondary benefit for pension fund members. Their mandate is to see to it that there is a primary benefit.

Solidarity is aware of resistance to the controversial pension plan from several other unions. We will support every action against the plan that any other union comes up with. We need to attack the plan from as many angles as possible.

We are also announcing a campaign today to ask thousands of South Africans for mandates to oppose pension capture. No matter who you are, where you work or what body you belong to, we will fight on your behalf to protect your pension.

The misuse of workers’ pension funds, like in this case, is an anti-worker decision. Workers’ pensions are not state money; it’s their own money.

We must oppose a dispensation of state monopoly capital. Given the current state of government finances, workers cannot rely on state guarantees for their pension money. State guarantees are no guarantee. So, pension money has to be used to come to the rescue of an empty state treasury and then the empty state treasury must provide a guarantee to pension fund members. Can you hear the paradox and absurdity?

First it was R85bn, now it is R250bn. First it will be Eskom and later it will be Denel, the SAA and e-toll. It starts with the GEPF and what is a voluntary contribution.

Later, private funds will be involved and then the involvement will be mandatory. We are not only contesting this decision; we will contest the full consequences of the decisions that are yet to come.

We are keen to engage with government on the question of how state enterprises should be financed. Using people’s retirement money without their consent is economically foolish and immoral.