WerkNet
Your Family
Your Career
Your Health
Your Money
You and the Law
Occupational Guilds
Solidarity Youth
S-Leer
Home › News Office › Public Protector or Public Threat? 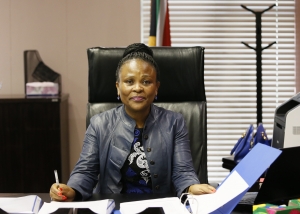 It is unusual, unacceptable and most disconcerting that during her term the Public Protector already has five damning court rulings against her in which her integrity and competence have been called into question directly.

“Pertinent questions about her understanding and application of law, and above all Adv Mkhwebane’s suitability for the position are currently in the spotlight. It was consequently requested that Adv. Mkhwebane be struck off the advocates roll. That is why the VRA convened a blitz seminar to reflect as an occupational guild on this issue facing the legal profession,” Werner Human, Solidarity’s deputy general secretary for legal services, said.

At the seminar the speakers highlighted three main points: the law applicable to the Public Protector; the context of the appointment and the work of previous Public Protectors; and where the answer to the problem can be found.

In his contribution Dr Curlewis expressed the opinion that when there is a public spat over the Public Protector the Legal Practice Council (LPC) cannot merely sit back and observe the public concern. It is expected of this council to consider the suitability of the Public Protector, especially in light of the fact that the courts have made findings of a serious nature against Adv Mkhwebane. The Legal Practice Council has a judicial discretion in this regard, and it is contended that this discretion should be exercised.

These are key questions: Does Adv Mkhwebane meet the standards expected of her in the legal profession? Does she show a propensity for dishonesty? Does she show contempt for the law and for our courts? Those are the questions a court will answer after thorough inquiry and consideration to ultimately show whether Adv Mkhwebane is suitable, or not.

Prof Koos Malan is of the opinion that the National Assembly can remove Mkhwebane by a two-thirds majority.

“Incompetence is the strongest ground on which she can be removed. One can only take decisions that are within one’s powers. However, Parliament is facing a problem – if Parliament removes her, then their own powers are prejudiced,” Malan said.

The storm brewing around the head of the current Public Protector is getting fiercer. She is in the hot water over alleged Gupta money and has just landed a fifth High Court ruling against her.

In his contribution Willie Spies pointed out that when one looks at all the previous public protectors a certain picture emerges. “The terms of all the previous incumbents, with the exception of Adv Thuli Madonsela, were to some extent shrouded in controversy. Adv Mkhwebane’s appointment is therefore not going against the pattern but her appointment is no doubt the most controversial,” Spies said.

So, what are we to do in this predicament? Prof Malan is of the opinion that as a civil society we have to offer an alternative, non-state solution. “In a well-organised civil society, a person is not just a spectator. You are an actual builder of a new constitutional order. Civil society must organise itself as well and as strong as possible to stand in for the malfunctioning of public institutions of the state,” Malan concluded.

The portfolio committee on justice and correctional services has indicated that Adv. Mkhwebane’s suitability for office would be officially discussed on 3 September.