WerkNet
Your Family
Your Career
Your Health
Your Money
You and the Law
Occupational Guilds
Solidarity Youth
S-Leer
Home › News Office › Renate Barnard: Champion for fairness 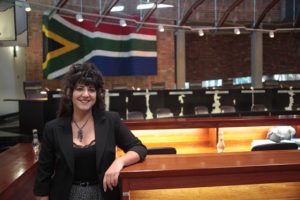 In the wake of the Constitutional Court ruling in 2014 in terms of which Renate Barnard, a former lieutenant colonel in the South African Police Force (SAPS), lost her case of unfair discrimination against the SAPS, Solidarity decided to take the battle against racial quotas to the United Nations.

A Solidarity delegation has just arrived in Geneva Switzerland where they will appear before the UN’s Committee on the Elimination of All Forms of Racial Discrimination later this month.

Shortly after the Constitutional Court had ruled against her, Barnard joined Solidarity’s Centre for Fair Labour Practices. Inge Strydom spoke to Barnard about how she is still tackling racial quotas undauntedly.

Q: How would you describe your role at the Centre for Labour Practices?

During consultations we obtain all the facts and then we prepare the merit of the complaints with a view to possible litigation. Those involved receive legal advice but are also supported emotionally because the wrong implementation of affirmative action measures by employers has a huge emotional impact on employees.

The centre’s reactive course of action focuses on litigation in terms of which we challenge employers in court about affirmative action practices in the workplace. As part of the litigation process it is our responsibility to obtain all the facts and to compile affidavits. We consult with the applicants, witnesses as well as with senior counsel to prepare cases for hearing by the courts.

Proactive work undertaken by the centre includes the assessment of employment equity plans of recognised industries within the trade union (such as Eskom, the mining industry as well as metal and engineering firms). We determine whether or not the plans comply with the provisions of the Constitution and the Employment Equity Act. We draft memorandums with proposals on amendments and we empower Solidarity’s organisers and shop stewards by providing them with quality training about affirmative action legislation and court rulings in this regard.

Q: Why did you at the time decide to work for Solidarity permanently?

A: It was a great privilege when Solidarity approached me to accept a job with them. I have come a long way with my legal team, and I have personally experienced the consequences and impact the wrong implementation of affirmative action has on people. I am passionate about my country, about people and it is my passion to be of service to those who are suffering and whose lives I can help improve.

I have first-hand experience of how government’s blind pursuit of racial targets is impairing service delivery (especially to poor communities.) Working for Solidarity gives me the opportunity to take a stand and to actively take action against unfair, unjust and wrong policies. Here, I can find fulfilment in my job, I can make a real difference in people’s lives and I can participate in building our country as a whole.

Q: What is the best part of your job as legal officer at the Centre as far as you are concerned?

A: To encourage people who are despondent and desperate due to their working conditions, to empower them in their battle and to motivate them not to give up are my motivators. In 2016, the Lord has blessed us abundantly and we have achieved major and sensational successes. Seeing the joy on the faces of the applicants (and their loved ones) when justice finally prevails is priceless and that is what makes our struggle worth the while.

Q: Do you sometimes miss the SAPS and the work you have done there?

A: Although I am incredibly blessed to work for an organisation such as Solidarity and I really enjoy my work, a part of my heart will always belong to the South African Police Service. I am SAPS born and bred and the Police is part of my DNA. I had a very challenging job in the Police and I miss that sense of camaraderie that prevailed among the members of old.

I am still working with SAPS members on a daily basis and I am in the unique position that I truly understand their frustrations and challenges. Thanks to the platform Solidarity is offering me, I am nowadays in a position to really help those members with the labour-related problems they are experiencing. It warms my heart when members show their respect by still calling me “colonel”. Then I don’t feel like an outsider and they let me feel as if I’m still one of them. That is a great honour.

My greatest desire is that the SAPS would again become the proud and reputable organisation it used to be before politics became the main consideration. The motto, “We protect and we serve,” was truly followed and directed us.

To me the Police was always the epitome of God’s hands and feet – that thin blue line between right and wrong, justice and injustice. That is why I believe it is so important that the right people are appointed in top positions and that quality people be recruited as members because police work is not an ordinary job, but a calling.

Q: What would you consider as the highlight of your time at the Centre for Fair Labour Practices?

A: There have been many highlights already, the most important possibly being the privilege to work with people who share the same passion, who are allowed to think outside the box, and to receive recognition for hard work. However, one of the most extraordinary moments was when we won a case of unfair discrimination against the Tshwane Municipality in which we acted on behalf of Mr Jan Pretorius. He (Mr Pretorius) is the most humble person I have ever met – a quiet person but of strong character.

Mr Pretorius has childlike faith in our Heavenly Father. The ruling was a major victory for Solidarity but even more so for Mr Pretorius – his unwavering faith in God withstood the test and justice prevailed. Afterwards, his wife and he paid us a visit at our offices and asked if they could pray for us. What a privilege! His case renewed our hope and strengthened our resolve to keep doing what is right.

Q: Could you identify with the plight of the dismissed SABC journalists and that of members of the Department of Correctional Services (DCS) who had to take their cases to the Constitutional Court?

A: Most definitely. The SABC journalists stood up for what they firmly believe in, namely to report the truth in an objective and balanced way and to keep people informed. Clearly, those journalists are passionate about what they have been called to do and they had the courage of their conviction not to fear intimidation and dismissal – as I had to do during my litigation against the SAPS. South Africa needs more people of the calibre of the SABC journalists, people who are prepared to take a stand against what is wrong and who are prepared to fight for what is right. Their courage, and of course Solidarity’s legal team, ensured that constitutional principles when it comes to press freedom can be protected and upheld.

The DCS employees’ battle was similar to my own. These applicants are very close to my heart. At the time of my Constitutional Court hearing in March 2014 they all joined me in court. That was the first time during my battle of eight years (at that stage) that ordinary came to support me. We all experienced an incredible sense of belonging. I once again realised what strength lies in standing together.

I was overjoyed for the seven employees for whom justice prevailed through the Constitutional Court hearing, but I shared in Pieter Davids’s utter disappointment because the court’s majority decision blatantly excluded him from any legal remedy. He is an incredible person with inherent personal strength and he took his loss like a real man. I have the highest regard and respect for the way in which he shared in the joy of his colleagues and handled his own pain and disappointment.

All of these applicants have one thing in common – the courage of their conviction not to bend the knee to the unfair and unlawful actions of their employers. I regard each one of them as creators of hope and supporting them was a privilege. History is written by people like them and their legacy is something to be proud of.