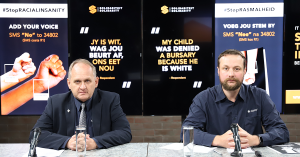 Solidarity released a report today during a media conference regarding the continuous and fearsome trend of racial discrimination in South Africa.

According to Connie Mulder, Head of the Solidarity Research Institute (SRI), this survey, to which 4 856 respondents reacted, indicates that race is virtually predominant in South Africa.

“Not only are people classified according to their race on a daily basis, but respondents unanimously agreed that your race determines your rights in South Africa,” explained Mulder. “This statement is then followed by thousands of incidents where participants explicitly explained how they themselves and their children were discriminated against based on race alone.”

Solidarity argues that the current prevailing situation in South Africa is completely abnormal and that the state’s insistence on apartheid-type racial classification – and the consequent enforcement of racial regulation that directly affects people’s jobs, service delivery and their children – causes enormous damage to race relations.

Mulder continued: “Once again, particularly disturbing, is the fact that the state’s regulation of race is beginning to reflect in basic interpersonal interactions and service delivery. When officials act openly racist at a lower level without any consequence, a message is conveyed that it is the correct way to handle citizens of a certain population group, and that the South African government will tax all races but certainly not deliver services to all races.”

This report forms part of a larger complaint that Solidarity will lodge with the United Nations’ (UN) Committee on the Elimination of Racial Discrimination (CERD) later this year.