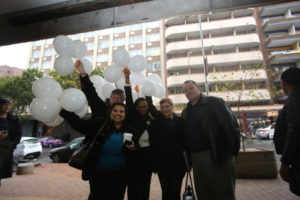 The Labour Court in Johannesburg today ruled that the SABC’s dismissal of the four journalists was unlawful. In addition, the SABC must reinstate the journalists in their positions immediately. The court also issued an interdict against any further disciplinary action against Foeta Krige, Suna Venter, Krivani Pillay and Jacques Steenkamp. Furthermore, within five days the persons responsible for the journalists’ dismissal must provide motivation to the court why they should not be held liable in their personal capacity.

Solidarity Chief Executive Dr Dirk Hermann, said Solidarity and each of the applicants join South Africa in sharing in the delight with the ruling. “The principles that have prevailed here are freedom of speech, press freedom, the right of the public to be informed and the curbing of executive powers. We knew all along that we would win as our case was morally and juristically justified,” Hermann said.

“Our members can now return to work to do what they are passionate about, and that is to serve the public by providing information to them. Through it all they were resolute to protect the principles upon which our democracy is based – even if they had to pay a high price for it personally,” Hermann said.

Hermann added that Solidarity was disappointed that it had to contest the matter all the way to court to prove the unlawful actions against its members. “The SABC should have shown moral integrity by not having taken a decision to exercise censorship in the first instance; they should not have taken disciplinary action against our members and after the Icasa ruling had clearly indicated that its actions were unlawful, the SABC should have withdrawn all actions against our members immediately.”

Hermann said Solidarity has observed throughout the process how the SABC had ignored judicial principles and processes. “However, one can only run away from the law for so long. The SABC has come up against the rule of law. However, constitutional principles should be an intrinsic part of a person and it should not be necessary for the courts to enforce it,” Hermann said.

Hermann added that although as strategic battle has indeed been won today, but that the war is far from over. “We are appealing to this powerful civil society alliance to intensify its campaign to win the war so the SABC can again be owned by South Africa,” Hermann said.