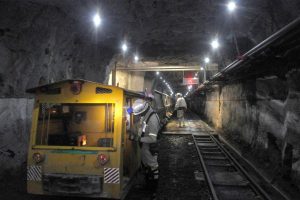 Reuters reports that precious metals producer Sibanye-Stillwater arrested nearly 1 400 illegal miners in a blitz at its SA gold shafts last year, which largely ended the practice at its mines.

Illegal gold mining costs the government and the industry more than R20 billion a year in lost sales, taxes and royalties. CEO Neal Froneman vowed last year to take the war to illegal miners and clear them from the shafts by January 2018 under the battle cry “Zero Zama”.

According to data provided to Reuters by Sibanye, it made 797 arrests in 2017 linked to illegal mining at its Cooke operations and 1 383 overall.  The blitz peaked in June with more than 500 arrests, above the 443 arrests in 2016.

Sibanye’s Head of Security, Nash Lutchman, said that, based on available intelligence, “there are only about 40 to 50 illegal miners operating now, scattered across our Kloof and Driefontein operations”.

Sibanye’s drive was helped by the mothballing of its loss-making Cooke operation west of Johannesburg, which was the epicentre of illegal mining activity in its shafts.  The company spent R300 million last year and will spend another R300 million this year on access and biometric controls at the entry points to its gold mines.