Sol-Tech – the future is already being built today 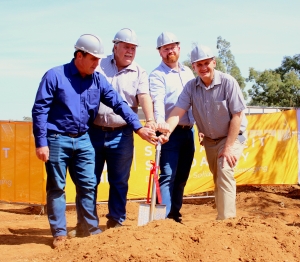 13 September 2019 – a day synonymous with excitement and success that has been in the making for a long time. Today the Sol-Tech Occupational Training College made a huge announcement by way of a traditional sod-turning ceremony.

The ceremony is part of Sol-Tech’s first big step in the construction of a new Sol-Tech campus. Sol-Tech, which has gone from success to success during the past 12 years, has already trained 1 200 students in various fields of study.

Solidarity COO Dirk Hermann sees this as a historical building project because this project is being funded by the community and because it will double Sol-Tech’s capacity. It will cost R300 million to complete the project. The development is undertaken by Kanton, the Solidarity Movement’s new property development company.

The event was attended by members of the public in their hundreds, including young people who could talk to Sol-Tech staff with great excitement about the various study fields on offer at this outstanding and leading institution. Young people had the opportunity to talk to experts in various fields about their future and how Sol-Tech can help them.

A real festive atmosphere filled the air like the smell of a genuine South African braai fire. We had the traditional braai and there was music provided by the famous South African band, Georgetown. Young and old came to listen to speakers from the Solidarity Movement and saw how the first ground was broken, using a spade manufactured in Sol-Tech’s workshops. Sol-Tech’s vision was shared with those present and people showed that the community wanted to be part of the project. The message was clear, and Dirk Hermann emphasised that we are here to stay and also to build!

It was really special to see how the Sol-Tech students who have already formed a bond with the institution could share in the plans for the future, precisely because they, and other young people, are the future.

The Solidarity Movement has started today to build the future of tomorrow!

According to Sol-Tech Managing Director Paul van Deventer, it was decided to the take the institution to a next level. With the planning and design of the campus it was compared to international institutions so this new campus can compete with the best in the world.

“We are proud of our new campus with its typically South African and uniquely Afrikaans design style,” Paul van Deventer said.

Solidarity is grateful for every member who contributes R10 a month towards the building fund, as well as for the thousands of other members who make smaller contributions every month to make it possible to build institutions such as this one.

“The only way we can ensure a future is to build it ourselves. In less than two years and a million bricks later we will have a campus here where young people will be equipped to stay in South Africa and to be free, safe and prosperous here,” Dirk Hermann said.

Although construction of the campus is still in its early phases, visitors could make use of the latest technology to view the campus from corner to corner as if they were physically on site and all this with the help of a VR lens.

The 3D reality that was achieved thanks to technology will soon be a reality and you are invited to be part of the project. Send an SMS with the word “BUILD” to 34802 to make your contribution.

The Solidarity Movement is ensuring you a free, safe and prosperous life!