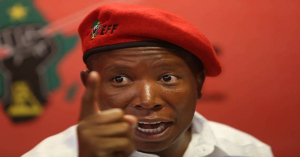 Solidarity and AfriForum today lodged criminal charges of slander, conspiracy for incitement to violence, and assault by means of threats at the Lyttelton police office against Julius Malema, leader of the EFF.

More than 1 000 police officers approached Solidarity with concerns about threatening remarks Malema recently made towards members of the South African Police Service (SAPS). Malema said, among other things, that they (the EFF) are not afraid of the police and that they will enter into fights with police members and their families in their own homes. Malema said the EFF will take on police members “one by one” in their comfort zones and teach them that no one is able to overcome the power of the masses.

“Solidarity was swamped by police members from across the country who expressed their shock, upset and total indignation at Malema’s words and threats. It is unacceptable for a political leader, who took an oath to respect and honour the Constitution and other legislation of the country, to speak out in such a violent way towards the police,” said Renate Barnard, Solidarity’s Sector Coordinator for the Public Sector, who is also involved with the police.

“It is clear that Malema still believes that he is above the law. The reason why Malema makes these remarks in the first place, is because to date there have been no consequences for all the previous incidents where he openly incited violence. If the police do not handle this matter with the necessary seriousness, Malema will see it as a confirmation that he is indeed above the law,” said Ernst Roets, Head of Policy and Action at AfriForum.