Solidarity – From the days of old to the future 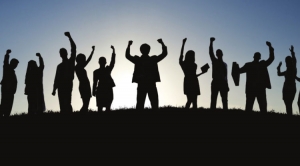 If you are a traveller and regularly travel around the country, then you will be aware of an obvious phenomenon – mine dumps. Mine dumps of all sizes and colours. Those dumps, consisting of several layers of the earth’s crust which, once upon a time was dug out by hand, have had a telling influence on the existence of Solidarity. Solidarity was born in 1902 amid a job crisis. In the period shortly after the Anglo-Boer War many Afrikaners were plunged into poverty and for many the mining industry was their only outcome.

Even though the Afrikaners and other employees who worked in the mines were tough men working with stone and enduring dire working conditions, those conditions proved to be a harsh reality that posed major challenges to employees. Those challenges could not just be left untouched. It required shoulders to the wheel to come up with effective solutions which employees could use to improve their conditions. From the beginning protecting jobs was at the heart of the organisations that constitute the Solidarity of today.

Many South Africans will still be familiar with the Mine Workers’ Union, or the MWU. In 1913 the Transvaal Miners’ Association changed its name to the MWU, and since 2002 this trade union has been known as Solidarity.

Solidarity organises itself collectively in various South African industries among others in mining, metal and engineering, agriculture, aviation, the chemical industry and at universities. Solidarity also represents individual members in their respective places of work all over the country

Solidarity members and other South Africans have questions and uncertainties about the future. The solutions Solidarity offers must be more and better than what a traditional union can offer.

Therefore, Solidarity has expanded and is no longer just a traditional trade union. Today, Solidarity is bolstered by its Network of Work. The strength of the NetWork lies in the fact that the various institutions and functions of the NetWork will bolster each other.

Ensuring good jobs has been Solidarity’s mission since 1902. Circumstances in 2019 are different, but the mission remains the same. To be able to do this, Solidarity has to think and do things differently and that is why Solidarity decided to re-design traditional trade unionism completely as the times we are living in present new challenges.

The purpose of the Solidarity NetWork is not to create jobs as such but to enable those who want to work to be able to work and to create jobs themselves. To achieve this, and to survive in the new economic revolution, knowledge and lifelong learning are prerequisites. Therefore, knowledge is a key element to counteract the disruptive effect of the fourth industrial revolution.

We are faced with the problems of a weakening state, jobs that have become obsolete and skills that are being challenged while professions that have not existed before are being created. The state is antagonistic towards Afrikaans schools and universities and racial discrimination is implemented even more harshly in the workplace.

The blows which the state is meting out from a position of power are releasing a new form of energy in our communities. People are becoming aware of their circumstances and where the future is heading. People, ordinary citizens, are becoming aware of the fact that the power that lies within their communities is stronger than that of the state. People want to have a sense of belonging!

What is Solidarity’s answer to these problems?

The NetWork which Solidarity has been building for the past 20 years is designed in such a way that Solidarity would be able to accompany its members along their full career path and on their life’s journey.

The NetWork starts with world-class Afrikaans schools that will be backed, and even established by Solidarity’s School Support Centre. – www.skole.co.za

The next link in the network is Solidarity Youth which is there to assist your child with subject and career choices at school level, while Solidarity Helping Hand’s Study Fund Centre offers assistance to prospective students in the form of study loans so they can qualify themselves at the highest academic level. www.youth.co.za

Afrikaans at public universities has been phased out almost completely. Akademia was created in response to this state of affairs. At the moment, this institution already has more than 1 000 students, and it plans to establish a fully-fledged campus for full-time students that would accommodate residences and sports fields to offer students a healthy student life as well. Akademia does not only have a strong emphasis on education – it also pursues the greater ideal of education. Moreover, Solidarity members and their dependent children qualify for a discount of 20% at Akademia. – www.akademia.ac.za

Solidarity established Sol-Tech back in 2007 and it has long been regarded as a leading technical college in South Africa. Sol-Tech is also the largest private college and the only one where Afrikaans is the language of instruction. A brand-new Sol-Tech campus is currently being built.

Sol-Tech also offers bridging courses in towns such as Wolmaransstad, Bethlehem, Naboomspruit, Klerksdorp and Worcester for learners to get the necessary qualification to gain access to Sol-Tech training. – www.sol-tech.co.za

In modern times professions are going through regular and rapid change and that is why continued learning must enable people to grow with their profession. S-leer was established to meet the need for continued learning, and it has already offered its courses with great success. – www.s-leer.co.za

Labour relations have always been and will always be a core function of Solidarity. Protection in the workplace and bargaining will always be crucial and Solidarity’s social plan and labour relations policy will serve as guideline for this service offered to members. It is true that the traditional collective models of trade unionism are being challenged and that employees need more protection in this regard. Strategic cooperation with other trade unions is being explored on an ongoing basis. Solidarity will also fight more proactively in the workplace against cadre deployment and unlawful and incompetent appointments that are being made under the guise of affirmative action.

Solidarity can pride itself in having the largest and strongest labour law division of any trade union in South Africa. At any given time, Solidarity has around 1 200 cases that are in progress and we win 87% of the cases we take on.

Traditionally, Solidarity members are organised according to the workplace. It was decided this year to also organise members by profession in occupational guilds. The guilds will help young people to get access to the workplace and to a specific profession. S-leer is a service provider for the guilds and will facilitate continued learning for guild members. The guilds will also champion the interests of the profession and will establish a network through which members can connect with one another. – www.gildes.solidariteit.co.za

Building all those Solidarity’s institutions that have work in mind will require capital worth hundreds of millions. A new company, Kanton, has been established to mobilise capital to build living spaces for Afrikaans and to facilitate a partnership between capital and culture. The company will therefore mobilise capital on a commercial basis to help Solidarity in this way to build all its institutions that are linked to work.

Solidarity wants to help you to open up a future for yourself and to do so through your job. The future we have in mind for you and your family is free, safe and prosperous!

Become a Solidarity member today – SMS the word “MEMBER” to the following link – https://solidarity.co.za/join in 1-minute/