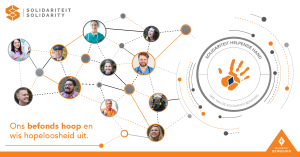 Any student in need who wants to study, but cannot afford it, may apply at the Study Fund Centre for financial support. Any generous person who wants to support this project can contribute to the Study Funds by making a once-off donation, an estate bequest or even by founding a new study fund. This precious investment in the future is maintained by students who complete their studies and pay back their loans to finance the next group of students.

The idea behind the Helping Hand Study Fund Centre, and Helping Hand as affiliate of the Solidarity Movement, originated from the “Helpmekaar-beweging” which was founded in the early 1900s by Afrikaners. The aim of this movement then was to uplift the Afrikaner psychologically and economically, grounded in and driven by the community. Like that movement, the Helping Hand Study Fund Centre aims to preserve the hope and future of Afrikaners by giving them a chance to empower themselves.

The Mine Workers Union – the organisation from which the Solidarity Movement developed, founded a study fund in the 1960s. The reason was the small number of Afrikaners who had the opportunity to study further. The aim of the fund was two-fold. The first was to raise funds to build the former Rand Afrikaans University (RAU) in Johannesburg and the second was to create a study fund to help these students to study. At that stage, there were only two bursaries of R2 000 each available. Today, the Helping Hand Study Fund Centre plays a prominent part in the uplifting of the Afrikaner. The underlying values of that first study fund is still valid and the reach of the impact thereof is growing exponentially.

The Helping Hand Study Fund Centre funds more than just students’ studies. The Study Fund Centre offers people an opportunity to dream bigger and to grow – something they cannot manage on their own. By taking hands with this initiative, we keep Afrikaners standing so that we can build a future together.