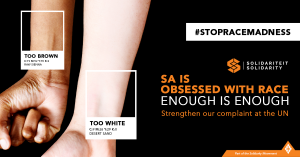 Solidarity today announced at a media conference that it will lodge a complaint against the South African government with the United Nations (UN’s) Committee on the Elimination of Racial Discrimination (CERD).

Solidarity contends that through this complaint it wants to normalise race relations in South Africa.

“We are taking a stand. We are heading to the highest authorities in the world to bring charges against the South African government before them. The South African government ignores the norms, values and rights of citizens that are internationally recognised as universal human rights,” Hermann said. “With this we want to force the government to treat races equally. This complaint demands nothing special, nothing strange and nothing excessive. All Solidarity demands is normal race relations. We simply demand equality before the law.”

Solidarity makes the point that the current complaint arises from a process that started years ago and that is now on the verge of dealing the race insanity of the South Africa government a death blow.

“Solidarity has been working and engaging with international authorities for quite some time already and a campaign spanning a long time is now on the verge of achieving success. Solidarity is on its way to the United Nations, and you can amplify our complaint even more! The world must take note of and condemn the South African government so that normality can be achieved in South Africa,” Hermann concluded.

Add your mandate to our mass complaint and take a stand with us against racial discrimination! Sign here.