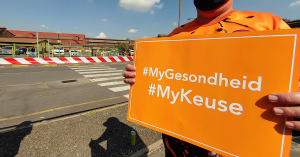 Solidarity members showed up for work at ArcelorMittal in Vanderbijlpark today. Their reporting for work is in protest against the lockdown regulations that have prevented hundreds of thousands of people to work. This came after Solidarity asked thousands of workers across the country to put pressure on the government so that all companies that can work healthily may open.

“The level of job losses and the crisis developing as a result of people who only receive a portion of their salaries are of such a magnitude that Solidarity members across South Africa said they will start reporting for work at their workplaces,” Solidarity Chief Executive Dr Dirk Hermann said.

The workers turned up at the steel plant with protective masks, hand sanitisers and comprehensive suggestions for working in a healthy way.

The action at ArcelorMittal is part of a comprehensive campaign by Solidarity in which thousands of workers across South Africa sign a public statement demanding that those who are able to work without compromising their health should return to work.

“We are not making a choice between health and work; we are opting for working in a healthy way. We have developed a comprehensive Code of Good Practice to make it possible for employers to resume work. The only obstacle preventing workers from starting to work in a healthy way is the government’s regulations.

We believe the onus should shift to companies to get them ready to work safely and healthily. The central planning of the economy is causing major damage to the economy,” Hermann added.

According to Hermann, decisions taken at central level have resulted in companies being forced to close, depriving them of the opportunity to put their own creative plans in place to work without compromising their health.

“We are calling on thousands of workers to make their voices heard. We do not have to keep quiet while our jobs are being destroyed.

Employees who want to sign the public statement can do so at https://corona.org.za/reg-vir-werk/ or SMS the word WORK to 34802.