WerkNet
Your Family
Your Career
Your Health
Your Money
You and the Law
Occupational Guilds
Solidarity Youth
S-Leer
Home › Press Releases › Solidarity: Minister is killing economy with regulations 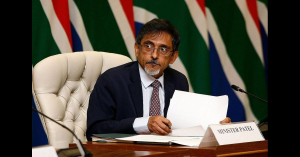 Solidarity expressed its concern after the latest GDP figures were released today. According to Solidarity, the growth is not sufficient to compensate for the losses caused by the lockdown measures, and Trade, Industry and Competition Minister Ebrahim Patel is hampering further growth with unnecessary regulations.

“Although 4,7% growth is better than expected, we should not forget about the 7% contraction in the previous year. While many other countries have already recovered from the collapse in 2020, South Africa is still plodding along while Minister Patel is regulating the economy to death. Furthermore, capital formation also decreased by 2,7%, which shows a clear aversion to investing in South Africa,” says Theuns du Buisson, economic researcher at the Solidarity Research Institute.

According to Du Buisson, the solution to South Africa’s plight is less regulation. He argues that it is worrying that certain industries are still shrinking over the long term while only a few others are thriving. He also points out that the more labour-intensive industries, in particular electricity, manufacturing and trade, are suffering the most, especially when taking into account the latest unemployment rates, which are at record levels.

“It is gratifying that sectors such as the financial sector are growing, but the reality is that most unemployed people are unskilled or semi-skilled, therefore they are not employed by these sectors. Although the labour-intensive mining sector did grow by 18,1%, this sector is particularly volatile because it is affected by commodity prices on the world market. Unskilled and semi-skilled labour is precisely where the greatest need is experienced, but employment is further complicated by regulations such as black economic empowerment and minimum wage.

“However, it is still possible take turn matters around and reform the economy. Unnecessary and obstructive regulations should be summarily scrapped. The time would also have been ripe to embark on infrastructure projects now if the state’s unfortunate incompetence and wasteful habits did not stand in the way of this. By regulating less, everyone can get the opportunity to become part of building up South Africa instead of everyone just sharing in the decline,” Du Buisson concluded.