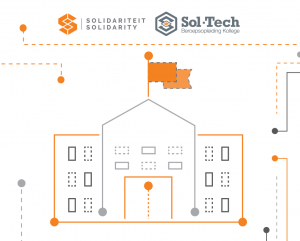 The Solidarity Network today officially started construction of the new Sol-Tech campus. This historic construction project will cost in the region of R300 million and will be funded in its entirety by the community. The development is undertaken by Kanton, the Solidarity Movement’s new property investment company.

Construction of the campus is the first major project that forms part of education and employment projects worth R4,5 billion the Solidarity Network will embark on over the next five years.

The next major project is the construction of the Akademia campus where world-class education will be offered though Afrikaans as medium of instruction.

According to Dr Dirk Hermann, Solidarity Chief Operations Officer, the construction of the Sol-Tech campus sends a strong message that Solidarity is here to stay. “We are not just building for our own generation but also for the next one. The campus will be a living monument of hope amid all the uncertainties of today,” Hermann said. The strength of Sol-Tech and of this campus lies in the fact that it is being built by the community. Every Solidarity member donates R10 to a Building Fund each month. Thousands of members of the public donate smaller amounts each month to make the building of institutions such as Sol-Tech possible. “What we see here is not the product of state money or major empowerment money but of small contributions by the thousands adding up to make something big happen. We are calling on people to join us in their thousands in working for these huge building projects. The only way we can ensure a future is to build it ourselves. In less than two years and a million bricks later we will have a campus here where young people will be equipped to stay in South Africa and to be free, safe and prosperous here,” Hermann said.

Solidarity started Sol-Tech 12 years ago, and already it has around 1 200 students in its pipeline. The new campus will double Sol-Tech’s capacity. “Although we are excited about the large number of students studying with us, our motivation never lies in numbers but always in quality. Sol-Tech is already considered one of the largest and best occupational training colleges in the country. Our success can be seen in the fact that our students all find jobs and there is even a waiting list of employers wanting to employ Sol-Tech students.

We have decided it is time to take Sol-Tech to a new level. Our own bigger world-class campus is the correct and following step. With the planning and design of the campus, we compared it to international institutions, and we can proudly say that this campus can compete with the best in the world. Although our criterium is world-class, our architects succeeded to use a typical South African and specifically Afrikaans design style. Traditional architectural styles have been absorbed in the design in a modern way. The layout of the campus acknowledges in a variety of creative ways historical events and dates where artisans played an important role,” according to Paul van Deventer, Managing Director of Sol-Tech.

The campus and residence development will cost approximately R300 million. In addition to the Sol-Tech campus, the Solidarity Network is also busy planning a new campus for Akademia and plans for building schools in cooperation with partners are in motion.

According to Henk Schalekamp, Managing Director of Kanton, the company is proud to act as the developer of these projects. The very reason for Kanton’s existence is to create living spaces for Afrikaans.

The function was attended by hundreds of members of the public and donators and a sod turning ceremony was held. Supporters were able to conduct a virtual tour of the campus with the help of 3D-goggles. The first earthwork will commence next Monday, and it is expected that the doors of the campus will be open for students in January 2021.

Members of the public who want to help us build by making small contributions, can send an SMS with the word BUILD to 34802.