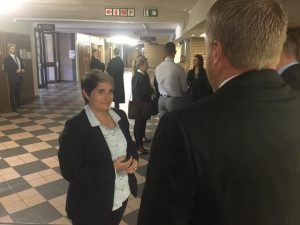 Trade union Solidarity obtained a victory in court on behalf of its member, Dané Hertz, when the High Court in Pretoria today ruled that she be deployed to a community service position within 30 days.

According to Anton van der Bijl, head of the Solidarity Centre for Fair Labour Practices, this court order creates an important precedent that can be applied in similar circumstances. “It is increasingly becoming clear that the public’s patience with the state’s blatant negligence in complying with their statutory obligations is wearing thin. We are planning to launch more similar actions against the Department of Health soon,” Van der Bijl said.

According to Van der Bijl, the court ordered Dané Hertz to be deployed to the clinic where she had initially applied. “We are very pleased about today’s ruling but it is distressing that we had to go this far to oblige the Health Minister and the Health Department to comply with their statutory obligations,” Van der Bijl concluded.